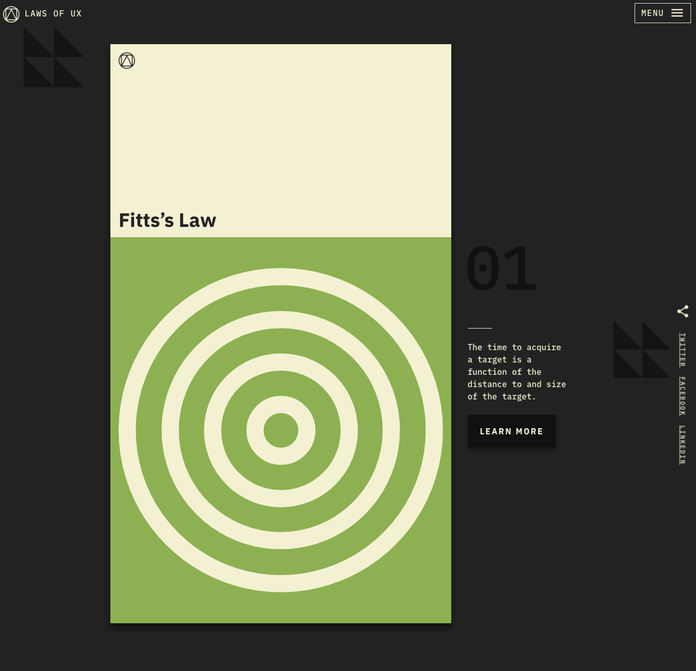 How to fail at X when writing about UX?

An interesting thing happened a few days ago. There was an article posted to HackerNews, titled 10 Laws of UX.

Each law was only mentioned by its name, not by its content. If you were familiar with the law, you knew what to expect. But if you didn’t know that Hick’s Law was about choices, you needed to click to go to a separate page to read about it. And then come back to the list and scroll again, to see the rest of the laws.

Then someone took the content, simplified the presentation and instead of naming the laws, provided his own one-sentence interpretations for each.

Was it beautiful? Absolutely not.

Was it more useful and helpful? By far.

Here’s how his version looks: 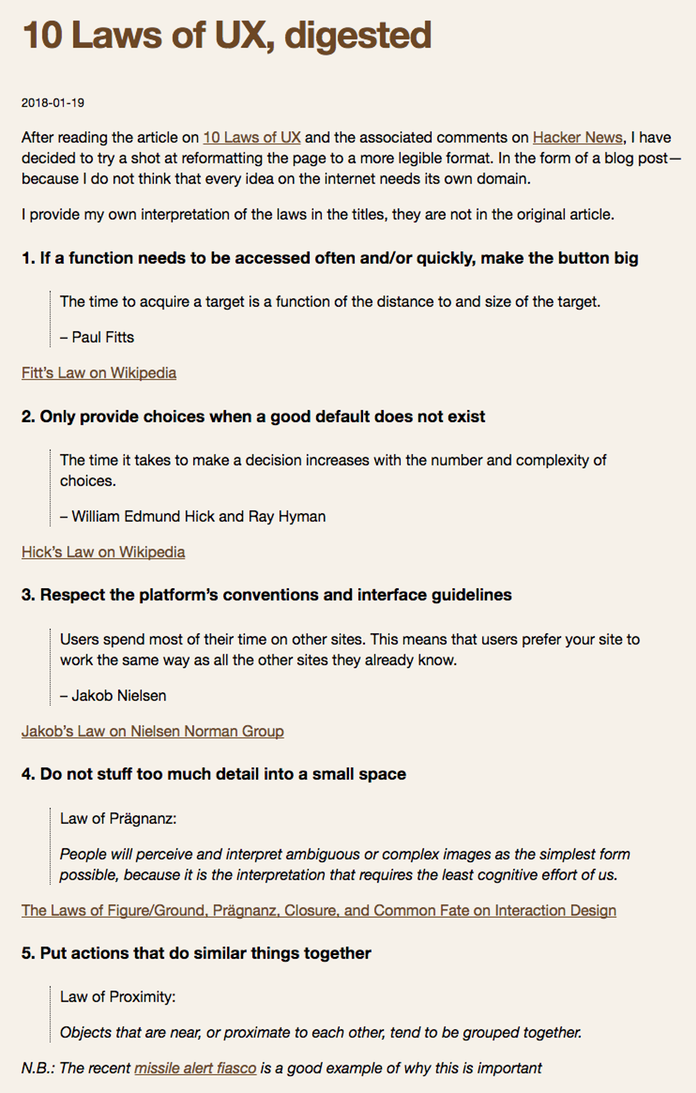 And here’s how the first screen of the original article looks:

And it’s only for the first law. You need to scroll the full screen for each one, and click to see what’s inside.

You can fail at X-perience even when you compile 10 Laws of User Experience.

And here are the laws, in their condensed, un-failed form:

1. If a function needs to be accessed often and/or quickly, make the button big

The time to acquire a target is a function of the distance to and size of the target.

2. Only provide choices when a good default does not exist

The time it takes to make a decision increases with the number and complexity of choices.

Users spend most of their time on other sites. This means that users prefer your site to work the same way as all the other sites they already know.

4. Do not stuff too much detail into a small space

People will perceive and interpret ambiguous or complex images as the simplest form possible, because it is the interpretation that requires the least cognitive effort of us.

The Laws of Figure/Ground, Prägnanz, Closure, and Common Fate on Interaction Design

5. Put actions that do similar things together

Objects that are near, or proximate to each other, tend to be grouped together.

N.B.: The recent missile alert fiasco is a good example of why this is important

6. Reduce the number of things your users have to remember

The average person can only keep 7 (plus or minus 2) items in their working memory.

Any task will inflate until all of the available time is spent.

8. Put the important things at the beginning or at the end

Users have a propensity to best remember the first and last items in a series.

9. Removing features from your product may result in users not being able to achieve some goals

Tesler’s Law, also known as The Law of Conservation of Complexity, states that for any system there is a certain amount of complexity which cannot be reduced.

Larry Tesler’s Law of Conservation of Complexity on Wikipedia

10. Make the most important thing stand out

The Von Restorff effect, also known as The Isolation Effect, predicts that when multiple similar objects are present, the one that differs from the rest is most likely to be remembered.

Alternatively: If you want to stand out from competition, find a feature which is always the same and make it different.

Do not put a leading zero on numbers that do not have to be aligned. 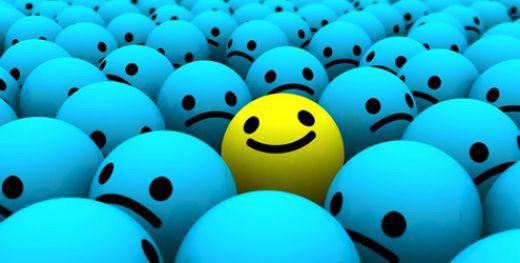