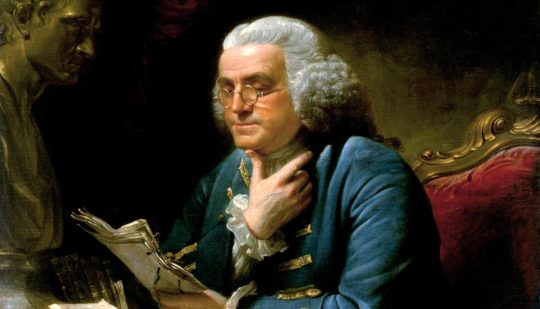 People don’t naturally extend goodwill to other people, let alone corporations, so loyalty needs to be carefully cultivated. But how exactly do you establish a lasting and positive connection?

There’s one counterintuitive method to establish loyalty — ask someone for a favor.

Yes, this goes against the common notion that it’s best to do someone a favor to get them to like you, but common notions are often flawed. Let’s take a look at the effect that drives this method, often called the Ben Franklin effect, and consider how you can use it to turn relative strangers into loyal customers.

What is the Ben Franklin effect?

Named after Ben Franklin (who wrote of borrowing a book from a rival who warmed to him as a result), this effect states the following:

If you ask someone to help you out in some way, and they indeed do, they will then be more likely to do you another favor.

Note that asking for the favor is not enough: the person asked needs to willingly provide it without feeling too cajoled.

The existence of this effect doesn’t mean that doing someone a favor doesn’t work at all. It often does, depending on the context.

The idea of invoking reciprocity, or reciprocation, was demonstrated by Robert Cialdini decades ago. However, doing the asking is often easier. And, a series of exchanged favors can lead to loyalty. Sometimes, though, circumstances make it easier to ask for something than to do something for another person.

On that note, if you intend to curry favor by asking for one, it will probably need to be small.

How does the Ben Franklin effect work?

Many studies have been done on this effect, and the culprit is an effort to resolve cognitive dissonance resulting from a perceived disparity between action and motivation.

The subconscious reasoning goes like this: “I’m doing something for this person. This means I like them. I wouldn’t do it if I didn’t like them.”

Apply this to the favor-requesting method of boosting loyalty and you get the following sequence:

If you don’t really like someone but you did them a favor, that might leave you feeling exploited somehow, or played for a fool. To protect the ego, it’s easier to decide that you actually liked them to begin with.

How you can use it to win customer loyalty?

Particularly in the ecommerce world, there are so many possible points of interaction that it’s extremely easy to create opportunities to ask minor favors. Let’s run through a simple sequence that you can adapt to almost any circumstance:

If you can follow that formula, you can end up with a solid selection of loyal customers ready and willing to do you favors for nothing more than the occasional incentive. Escalate those incentives (as you would for a full customer loyalty scheme) and you can start turning them into influential brand advocates.

Got into the habit of doing too many favors for ungrateful or indifferent customers? Try flipping the script and asking instead. You just might find that the Ben Franklin effect is the missing loyalty ingredient you’ve been searching for.

How to Use the Ben Franklin Effect to Increase Loyalty

PS. Wow, you’ve made it all the way to the very end. How incredibly generous of you! This means a world to me, I really appreciate it. Seeing how you enjoy reading the quality stuff, maybe you should like GrowRevenue on Facebook too? You’ll get more of the good stuff, more often.