Summary: In people with normal vision (or corrected-to-normal vision), visual performance tends to be better with light mode, whereas some people with vision-related disorders may perform better with dark mode. On the flip side, long-term reading in light mode may be associated with myopia.

Recently, dark mode was introduced in IOS 13 and it has also become a popular design trend to provide a dark mode for many apps. 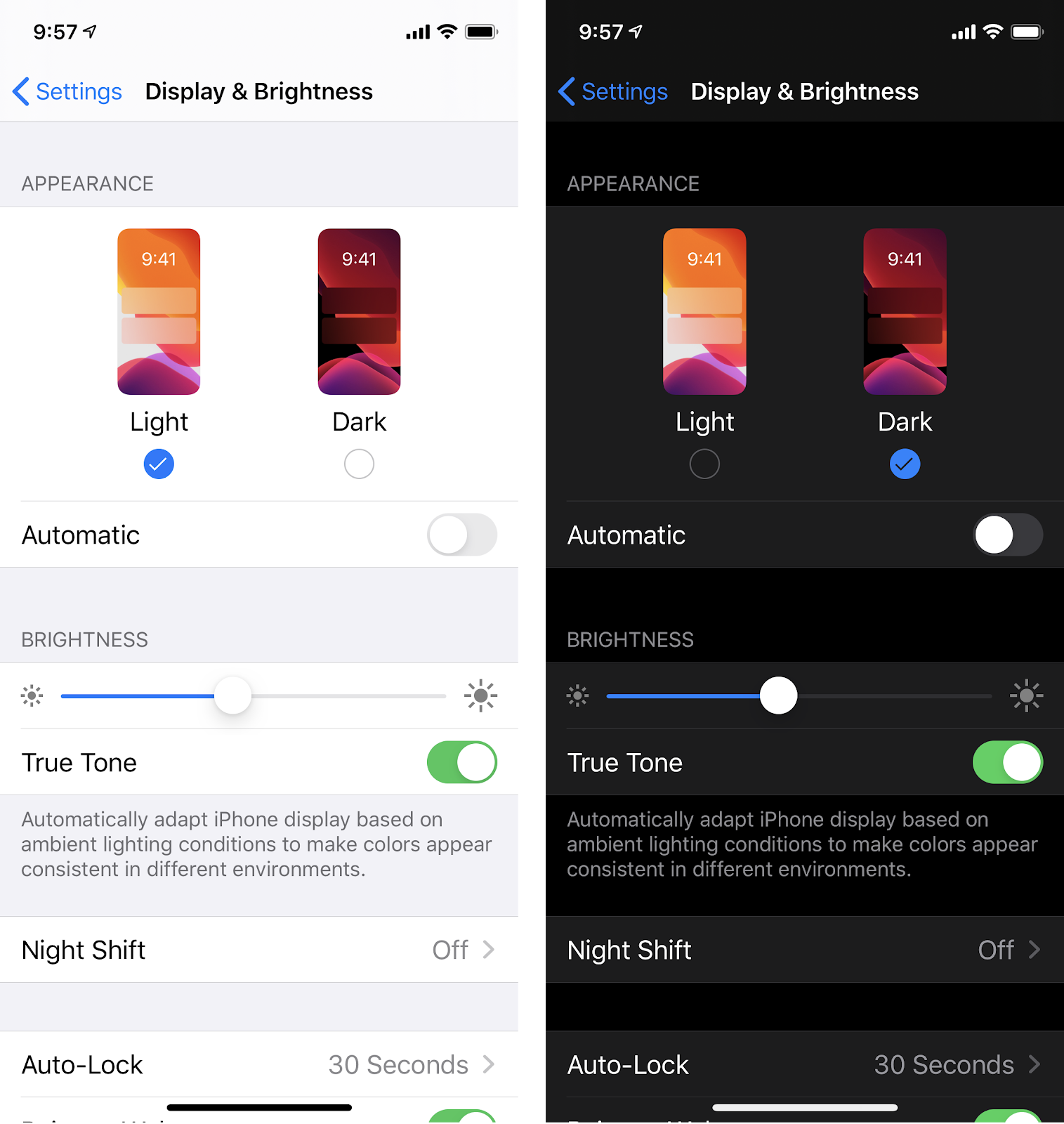 The article presents a review of the academic literature on whether dark mode has any benefits for users — with normal vision or not.

Definition: Contrast polarity is a term used to describe the contrast between the text and the background:

The Human Pupil Is Sensitive to the Amount of Light

The human pupil is the gateway to the retina: through it, light reaches the eye. By default, the human pupil changes size depending on the amount of light in the environment: when there is a lot of light, it contracts and becomes narrower, and when it’s dark, it dilates to allow more light to get in. Smaller pupil sizes make the eyes less susceptible to spherical aberrations (in which the image appears unfocused) and increase the depth of field, so people don’t have to work so hard to focus on the text, which, in turn, means that their eyes are less likely to get tired. (Camera apertures work exactly in the same way: a photo taken at f/2.8 will have a narrower depth of field and thus more blurring than one taken at f/16.)

As we age, the pupil decreases in size. Too small pupil sizes mean that too little light enters the eye, which impairs our ability to read or detect text, especially in low ambient light (for example, at night). On the other side, as we get older, we become more susceptible to glare, and glare is particularly likely under bright light.

Early studies conducted in the 1980s seemed to point out that, for people with normal vision or corrected-to-normal vision (i.e., wearing appropriately prescribed glasses or contacts), the contrast polarity did not affect visual performance.

Yet, several more recent studies contradict that initial finding. One article, published in 2013 in the journal Ergonomics, looked at visual acuity and reading performance, and the other one, published in 2017 in Applied Ergonomics, investigated performance for a glanceable-reading task — the quick reading of 1–2 words that people often engage in when they interact with a mobile phone, a smartwatch, or a car dashboard and that is involved in activities such as checking directions or attending to a notification.

Effects of Contrast Polarity on Visual Acuity and Proofreading

Cosima Piepenbrock and her colleagues at the Institut für Experimentelle Psychologie in Düsseldorf, Germany studied two groups of adults with normal (or corrected-to-normal) vision: young adults (18 to 33 years old) and older adults (60 to 85 years old).  None of the participants suffered from any eye diseases (e.g., cataract).

The participants were given two different types of tasks:

The researchers also collected pre- and post-test fatigue-related measures: participants rated their eyestrain, headache, muscle strain, back pain, and subjective well-being at the beginning of the experiment, as well as at the end.

When researchers looked at fatigue metrics, they concluded that there was no significant difference of contrast polarity on any of them (meaning that it wasn’t the case that dark mode made people more tired, or vice versa).

Another study, published in the journal Human Factors by the same research group, looked at how text size interacts with contrast polarity in a proofreading task. It found that the positive-polarity advantage increased linearly as the font size was decreased: namely,  the smaller the font, the better it is for users to see the text in light mode .  Interestingly, even though their performance was better in the light mode,  participants in the study did not report any difference in their perception of text readability  (e.g., their ability to focus on text) in light versus dark mode — which only reinforces the first rule of usability: don’t listen to users.

Jonathan Dobres and his colleagues at MIT’s Agelab attempted to quantify whether ambient lighting conditions (simulated daytime compared to simulated nighttime) affect in any way the advantage of positive polarity in the context of a lexical-decision task. A lexical-decision task, a paradigm commonly used in psychology, involves showing participants a string of letters and having them decide whether it’s a word or a nonword.  A lexical-decision task is more similar with the glanceable reading that we do in highly interruptible conditions such as when driving or using a mobile phone or smartwatch on the go — all of these involve quickly looking at a display and extracting the relevant information.

The participants in the Agelab study had normal or corrected-to-normal vision. They were shown character strings at two possible contrast polarities (dark mode vs. light mode), in different ambient lights (daytime vs. nighttime), and at different font sizes.

The study found that lighting, polarity, and text size all had an effect on performance — in the direction perhaps expected by now: simulated daytime lead to faster judgements than simulated nighttime, light mode was better than dark mode, and bigger font was faster than smaller font. The interesting result was the significant interaction between ambient lighting and contrast polarity:  during daytime, there was no significant effect of contrast polarity, but during nighttime, light mode led to better performance than dark mode . Moreover, during nighttime it was much harder for people to read small-font text in dark mode than in light mode.

People were faster during daytime than during nighttime, in light mode than in dark mode, and with larger font sizes (4mm) than with smaller font sizes (3mm). During nighttime, light mode was significantly better than dark mode and small font was a lot easier to read when in light mode. (Shorter bars are better than taller ones. Note that the time measure reported in the experiment is the presentation-time threshold; while technically more complicated than the judgement time, it essentially represents the time needed by the participants to make a correct assessment of the presented string.)

An intriguing study published in Nature Research’s Scientific Reports in 2018 suggests that  sustained exposure to light-mode may be associated with myopia (nearsightedness) . Myopia refers to the inability to see far objects clearly and is strongly correlated with the level of education and with reading. In their study, Andrea Aleman and her colleagues at University of Tübingen in Germany asked 7 human participants to read text presented in dark mode and light mode for an hour each. To see if their predisposition to myopia changed after reading, they measured the thickness of the choroid, a vascular membrane behind the retina. The thinning of the choroid is associated with myopia.

This result seems to suggest that, even though performance in light mode may be better in the short term, there may be a long-term cost associated with it.

There is an implicit consensus that dark mode is better at least for some people with visual impairments.  Gordon Legge and his colleagues at University of Minnesota define two low-vision categories: (1) due to central-vision impairments and (2) due to cloudy ocular media.

The ocular media refers to the various transparent substances in the eye, including the cornea and the lens. The most common cause of cloudy ocular media is cataract, which refers to the clouding of the lens and is fairly common in older people. A cataract scatters and blocks some of the light that is supposed to reach the retina through the lens and thus prevents the creation of a clear, focused image on your retina.

Even as early as 1977, a study by Sloan reported that  some people with low vision prefer dark mode . In 1985, Gordon Legge and his colleagues at University of Minnesota hypothesized that this effect is due to “abnormal light scatter due cloudy ocular media” — presumably, because, if more light reaches the eye with a cloudy lens, there’s a bigger chance of a distortion. Thus, dark mode may be better for people with cloudy ocular media because the display emits less light.

In Legge’s study, each of the 7 participants with cloudy ocular media had better reading rates with dark modes, whereas the rest of the participants, who had impaired central vision, were not affected by contrast polarity.

Legge’s studies formed the basis of recommending the possibility of switching to dark mode for modern computer interfaces. In 2005, Papadopoulos and Goudiras, in an article that reviewed various accessibility best practices for low-vision users, recommended the availability of dark mode in user interfaces.

A caveat noted by several of the researchers in the normal-vision field is that Legge’s studies with low-vision users were conducted with CRT displays, as opposed to the LEDs used in most modern displays. These displays were more susceptible to flicker in light mode than in dark mode, thus possibly biasing the results against the light mode.

So, should you jump on the dark-mode bandwagon?  While dark mode may present some advantages for some low-vision users — in particular, those with cloudy ocular media such as cataract, the research evidence points in the direction of an advantage of positive polarity for normal-vision users. In other words, in users with normal vision, light mode leads to better performance most of the time.

Why is light mode better for performance? These findings are best explained by the fact that, with positive contrast polarity, there is more overall light and so the pupil contracts more. As a result, there are fewer spherical aberrations, greater depth of field, and overall better ability to focus on details without tiring the eyes.

Even though larger font sizes and bright ambient light may erase some of this advantage in people with normal vision, at this point we don’t recommend switching to dark mode by default if your target audience includes the general population.

That being said, it’s strongly recommended that designers allow users to switch to dark mode if they want to — for three reasons:

(1)  there may be long-term effects associated with light mode;
(2) some people with visual impairments will do better with dark mode;
(3) some users simply like dark mode better.

People rarely change defaults, but they should be able to. It’s unlikely that people will alter the display mode for any random website, but, if a website or an application sees frequent use, it should consider providing this option to its users. In particular,  applications meant for long-form reading (such as book readers, magazines, and even news sites) should offer a dark-mode feature . And the option should ideally be pervasive throughout all the screens of that website or application. Moreover, if an operating system provides a dark-mode API (like iOS does), make sure you take advantage of it — doing so will give those users who decide to switch to dark mode the ability to experience your application or website in their chosen contrast polarity.

Dark Mode vs. Light Mode: Which Is Better?

PS. There’s also a case of reading during daytime (light mode preferred) and during nighttime (dark mode preferred), especially important with mobiles. It doesn’t have to be either/or. Both options have advantages in certain situations. An option to automatically switch light/dark based on the time of day, or a quick option to change between the two should solve this.