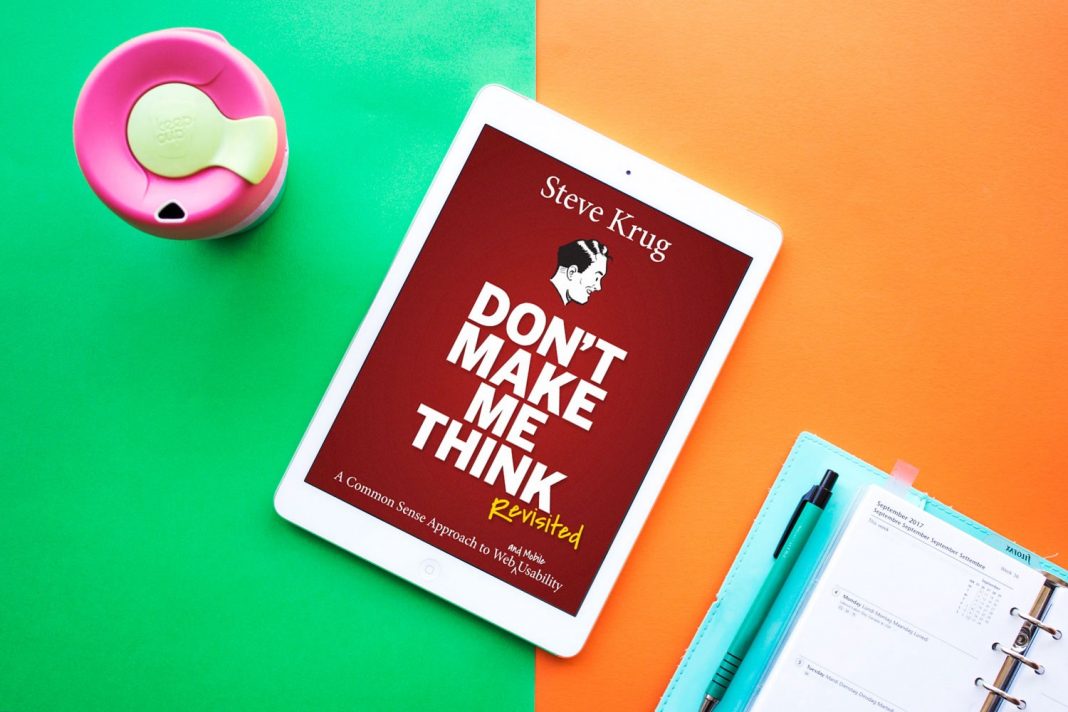 Especially when the basics often tend to be forgotten, even if they shouldn’t be.

For me, Steven Krug’s “Don’t Make Me Think” book and the lessons in the book is one of such fundamentals.

“Don’t Make Me Think” describes the key points, examples, and insights which are important to know about website usability. The major idea is to create designs with which users wouldn’t need to think too much how the interface works — this way it becomes not only problem-solving but also easy to use.

While all the lessons are pretty straightforward, and well… fundamental, it’s still a great refresher to come back to.

Let’s dive in and revisit what needs to be ingrained in the brain.

I’ve added my comments under each rule, to give it context and some examples from my experience.

If something requires a large investment of time — or looks like it will — it’s less likely to be used.

Here the “if it looks like it will” is the crucial bit. If you make the process simple, but it still looks like an effort, it won’t work well. The opposite is also true!

Making every page or screen self-evident is like having good lighting in a store: it just makes everything seem better.

Ideally, one screen = one purpose.

A needless source of question marks over people’s heads is links and buttons that aren’t obviously clickable. As a user, I should never have to devote a millisecond of thought to whether things are clickable — or not.

This is where the flat design falls… flat. A button should look like a button. A link should look like a link. And you don’t need to make the link underlined blue, you can still make it look clickable without the feeling of Internet Explorer 6.

Usability is about people and how they understand and use things, not about technology.

Start with what people do and figure out the technology you need. Don’t start with a shiny new tool.

The main thing you need to know about instructions is that no one is going to read them — at least not until after repeated attempts at “muddling through” have failed.

You can put it in 50px red bold text in a full-screen pop-up. Doesn’t matter. Half the people won’t even see it, and another 40% won’t bother to read a single word of it. This is one of my longtime frustrations. But this is also a reality, and you need to be aware of it and create the experience accordingly.

Your objective should always be to eliminate instructions entirely by making everything self-explanatory, or as close to it as possible. When instructions are absolutely necessary, cut them back to a bare minimum.

It’s called “Don’t make me think” for a reason. And it’s a good reason.

The more you watch users carefully and listen to them articulate their intentions, motivations, and thought processes, the more you realize that their individual reactions to Web pages are based on so many variables that attempts to describe users in terms of one-dimensional likes and dislikes are futile and counter-productive. Good design, on the other hand, takes this complexity into account.

The fact that the people who built the site didn’t care enough to make things obvious — and easy — can erode our confidence in the site and the organization behind it.

Good design is the one that people don’t notice. Make the process easy and seamless, and people won’t even notice and comment. But make it unintuitive and watch your conversion rates drop.

The problem is there are no simple “right” answers for most Web design questions (at least not for the important ones). What works is good, integrated design that fills a need — carefully thought out, well executed, and tested.

The bit with “carefully thought out, well executed, and tested” is where most businesses fail.

Designers love subtle cues, because subtlety is one of the traits of sophisticated design. But Web users are generally in such a hurry that they routinely miss subtle cues.

A light blue border on some of the elements, instead of the light gray, to signify some different aspect of the object? It looks good in Photoshop and on a designer’s monitor. It won’t ever be noticed by 80% of people.

Fancy shiny stuff wins awards much more often than it persuades people to buy. So usually it’s a trade-off between beauty and effectiveness. Not always, but close enough.

If you want a great site, you’ve got to test. After you’ve worked on a site for even a few weeks, you can’t see it freshly anymore. You know too much. The only way to find out if it really works is to test it.

And now for the way it usually looks: “Yeah, this looks good. Implement it.” And you’re left with a new design and no clue if it’s more effective, less effective, or made no difference at all.

PS. “Don’t Make Me Think” was one of the early books that I’ve read which contributed to me becoming interested in conversion optimization and to doing what I do now for a living. It all started with “Why We Buy” though. It was the first book on this subject that I’ve read, and I was instantly fascinated.