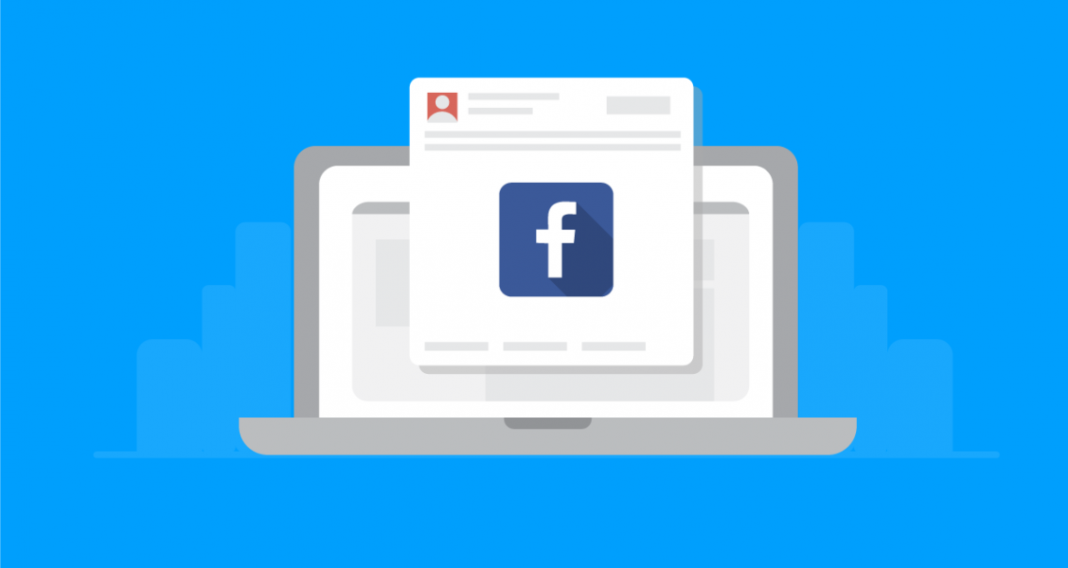 Launching a Facebook ad campaign that ROIs, however, is another story.

You can’t just throw an image and some decent copy together and call it a day anymore. You have to know exactly what you’re doing and why you’re doing it.

All you need to know is what works and then, figure out how to create a similar formula for your business and product.

To make that process easier for you, DigitalMarketer compiled 47 Facebook ad examples, with explanations of what it is that makes them great.

All the ads are from Facebook’s Ad Library—a searchable repository of every active ad run on any of Facebook’s platforms (yes, this does include Instagram too).

Note: For all 47 examples, see the full article (link at the bottom). I’m including the first 20 here. 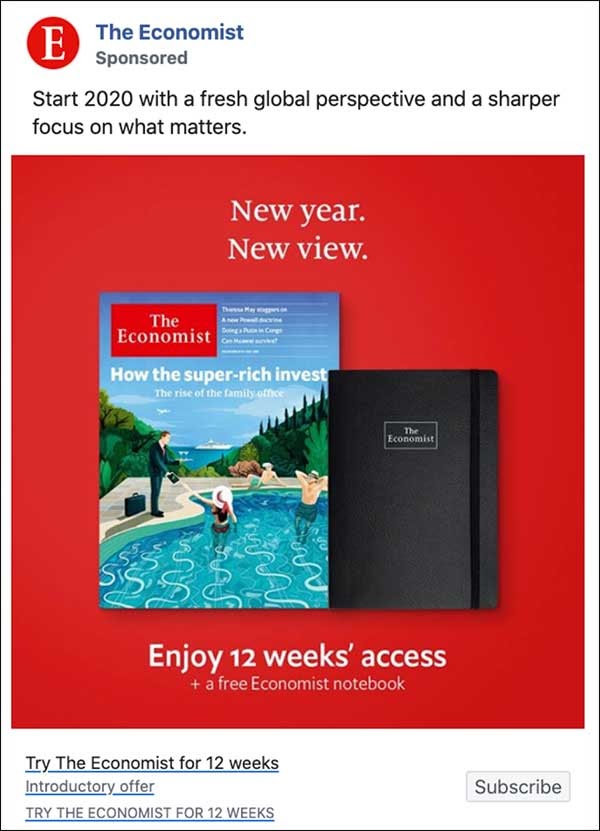 What Makes this Ad Great: Timeliness is a great attribute in an ad. By jumping on the New Year’s hype, The Economist becomes much more relatable to people, and top of mind when they think about their New Year’s goals (which is probably a lot… “New Year, New Me” is everywhere). 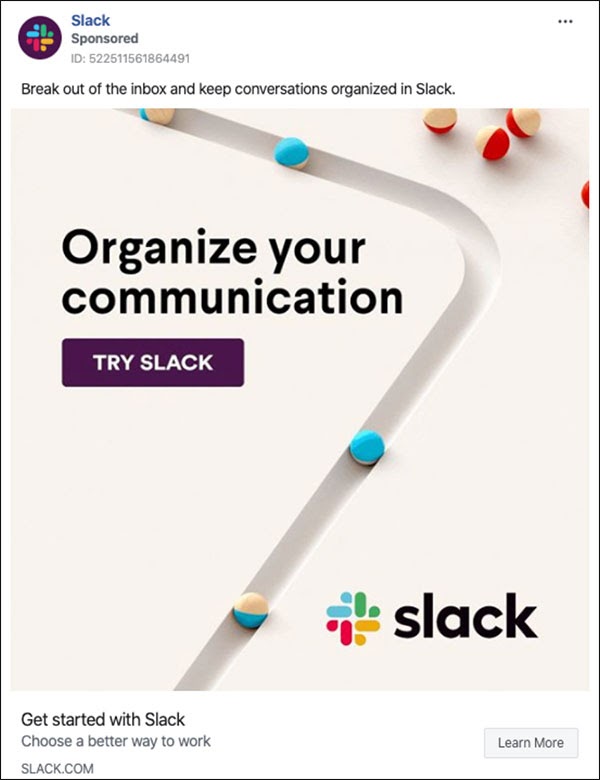 What Makes This Ad Great: Slack has always done a great job speaking to its core audience. They know that one of the big struggles of their customer avatar is an overwhelming number of emails. Slack poses their product as a way to “Break out of the inbox” and “organize your communication.” This is a great use of the before and after states. 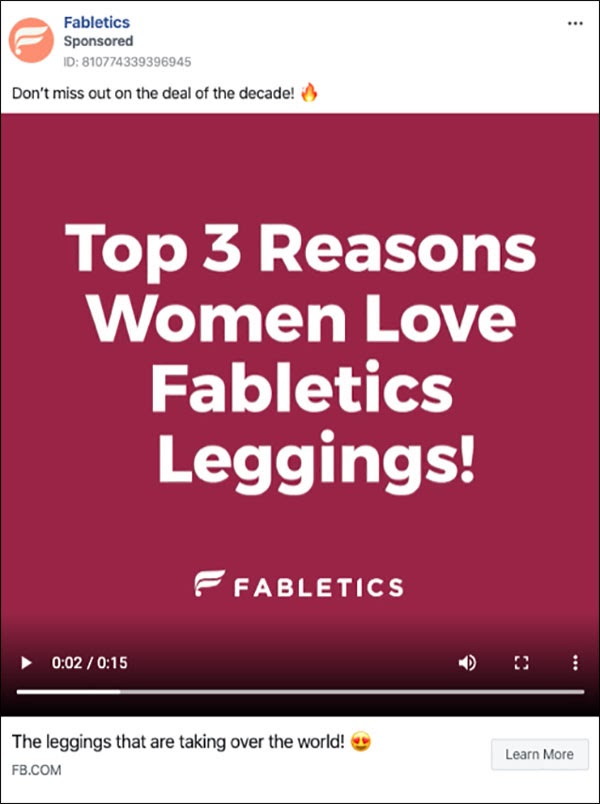 What Makes This Ad Great: This video ad is great because it features cuts between customers using the product (workout clothes), and a text talking about the benefits of using Fabletics as opposed to other brands. 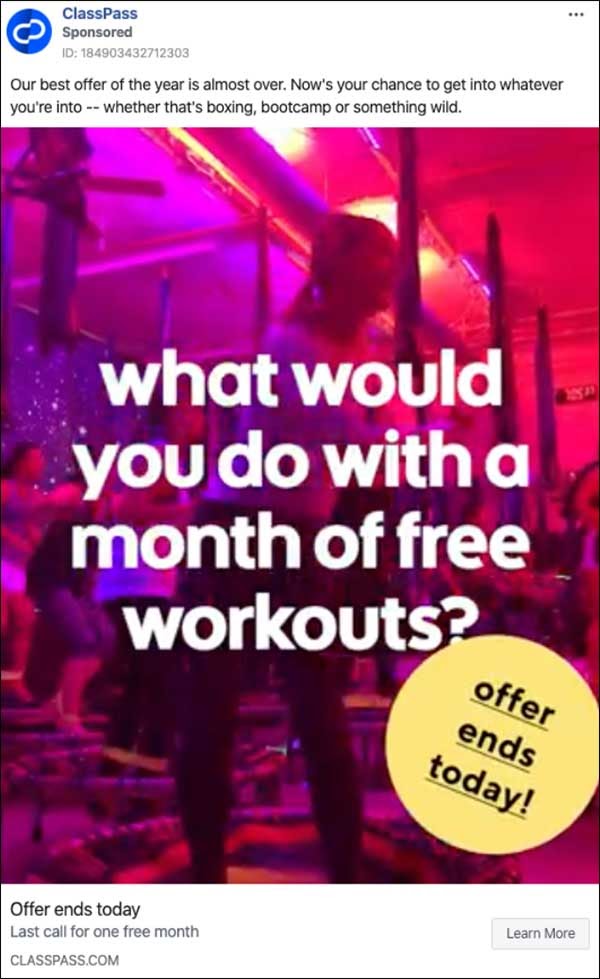 What Makes This Ad Great: This ClassPass ad features a similar style to the Fabletics video ad, but this one is featuring a special offer. It is also themed around the new year’s hype, which is a great strategy to build urgency (you gotta buy the subscription while you’re still motivated to work out in the new year, right?). 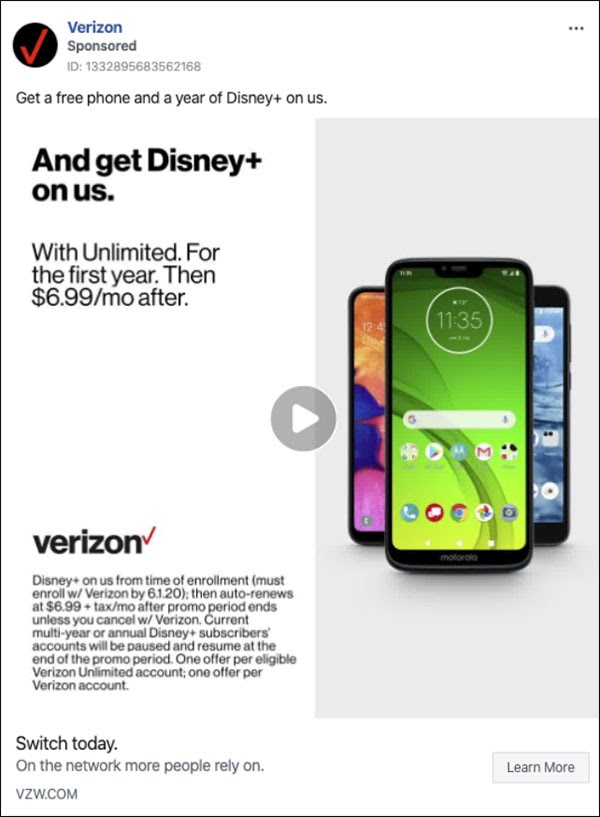 What Makes This Ad Great: Verizon is taking advantage of bundling offers, and highlighting them on this ad. The text and image on the ad slides in from the side which draws attention towards the ad, since the movement is opposite the scrolling motion. 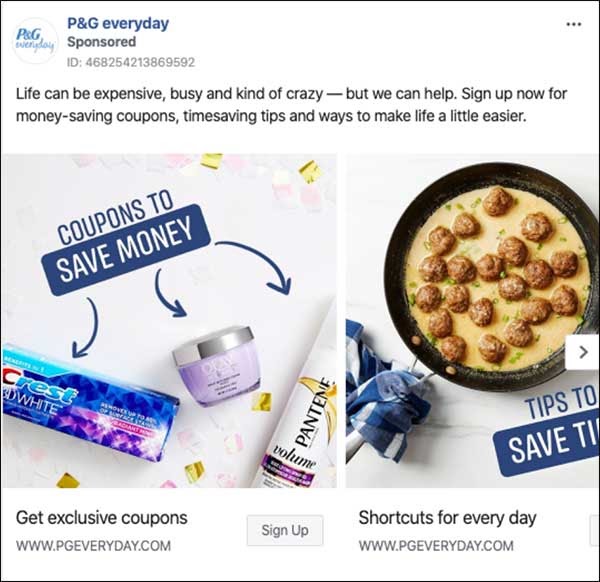 What Makes This Ad Great: This carousal ad is a great option for a company with a variety of product lines. Here, P&G highlights different products in a cohesive ad, which shows that they can be used together. 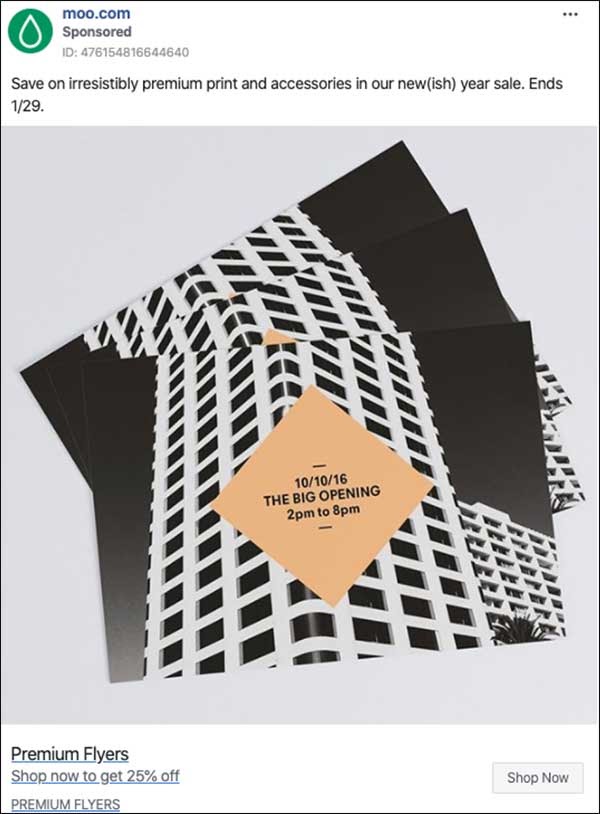 What Makes This Ad Great: Moo does a great job highlighting their customers using their service. Using customer testimonials, use cases, or customer stories are all great ways to show how your product can be used and increases the chances someone else will want to buy and use it. What Makes This Ad Great: Here’s another great example of a customer use case from Ram. Here they are advertising how businesses can customize the trucks with their own brand images. 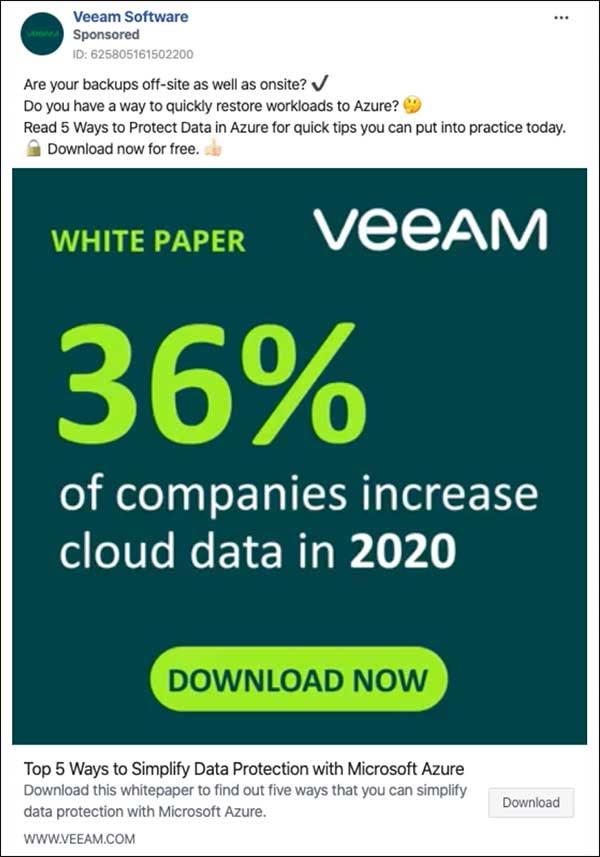 What Makes This Ad Great: This ad is highlighting a relevant statistic about data. People are naturally drawn to percentages, since they convey information quickly and simply. This ad is also great because it has a CTA button that is prominent, which increase the likelihood people will click on the ad. 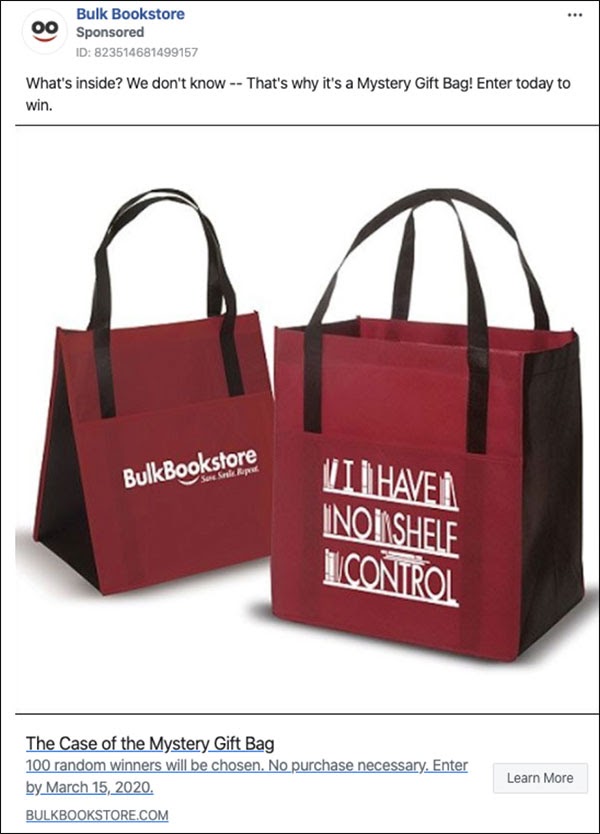 What Makes This Ad Great: This ad doesn’t focus on highlighting the product, but instead it is using a mystery giveaway. Not revealing what the prizes are builds curiosity and suspense for the ad viewer, which encourages them to click and enter the giveaway. What Makes This Ad Great: In this ad DavidsTEA is highlighting a customer Benefit (free shipping) and is also showing some of their new products. Ads like this are great for retargeting past buyers, because it reminds them of the benefits of purchasing, and entices them with new products.

What Makes This Ad Great: A Google Ads ad about using Google Ads… Ad-ception! This ad is hitting on a customer realization in the hopes that people would identify with the statement and realize they need the service. This is a good use of subtly pointing out a customer’s before state. 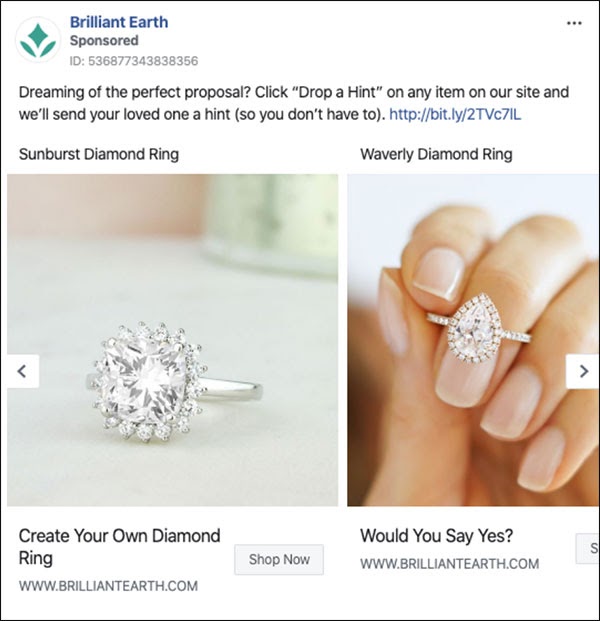 What Makes This Ad Great: Brilliant Earth does a great job retargeting their ads to people who have used their “build your own ring” quiz (don’t ask me how I know…) . Here’s an example of their carousal ad displaying a variety of different rings. What Makes This Ad Great: This video ad does a great job showing the before and after states. It starts with people sipping wine and clearly not liking it. Then, after using the service, they are happily drinking wine they do like together. What Makes This Ad Great: Here Amazon is using 2 of the tactics we talked about before, percentages and customer stories. The headline is also worded in a similar way that news sites write their headlines “____ does ____ with ____”, which is engaging and eye catching. What Makes This Ad Great: Quick cuts capture the user’s attention, while also highlighting the many ways the Yeti brand fits seamlessly into the active lifestyle of the target audience. With no mention of features, the ad copy taps into the ethos of who the product is made for, allowing the user to feel elevated by the brand. What Makes This Ad Great: This ad does a great job of answering the #1 question a business owner has when trying to figure out if they would benefit from a specific software tool (like Asana)—what does it look like? In this ad, Asana gives viewers a look at the interface, showing them exactly what to expect from Asana. Then, they made their CTA “Start your free trial today” the first sentence in their copy, ensuring viewers don’t miss their offer. What Makes This Ad Great: In this ad, ButcherBox uses aesthetic to grab a Facebook user’s attention and then brings their attention to the upcoming holiday (Valentine’s Day). Their ad copy mentions the value of buying their meat over other meat—in this case that it is “humanely raised, sustainably sourced, and grass-fed”—which assumingely is something their customer avatar is looking for in their meat selection. What Makes This Ad Great: This ad immediately hits on the main point somebody who wants braces has—braces are expensive. In their ad, Candid immediately mentions that their teeth straightening solution costs 1/3 of the cost of braces. Then, they show 3 straightening myths, showcasing their expertise and improving their authority to the viewer. This helps the viewer start to trust Candid, as the see them as knowledgable in the teeth straightening space. And what do we know about making yourself an authority in your space? It leads to conversions.

By looking at this many Facebook ads, you’ll now start to see patterns in the ads that show up on your newsfeed. You’ll see marketers using social proof, benefits, offers, scarcity, and FOMO to make people click the button. These are all patterns that will also work for your business.

See? This definitely isn’t rocket science. It just requires some basic knowledge of what makes people buy and then how that works in a Facebook ad template.

47 Facebook Ad Examples That You Can Swipe for Your Business

PS. From the list above, find a few angles that work for you and then rotate them to keep the ads fresh and your price per click low.