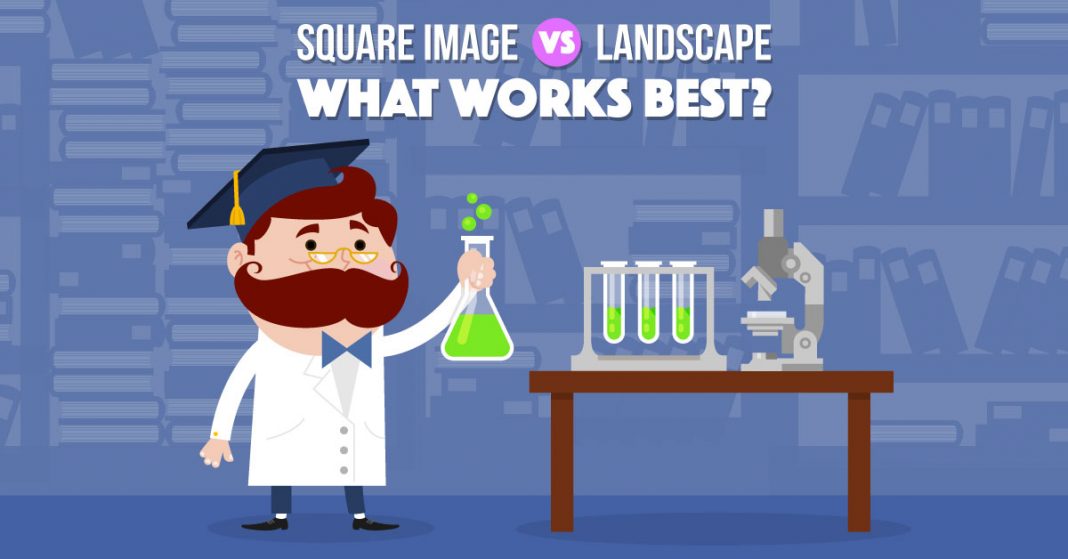 The most important part of a Facebook ad is always the image or video.

Users scroll through their newsfeed at speed, so you need engaging visuals to make them stop, then with any luck, they’ll read the headline and ad text.

Without an eye-catching image, it doesn’t matter how good your ad copy is, the chances are they won’t even register it as they scroll past.

And if that was not enough, until a few months ago, Facebook advertisers could only use landscape images for their ads, and this has been frustrating.

Then everything changed. Now Facebook allows to use square images for ads both on its platform and on Instagram.

But frustration is still there, and now the question is:

AdEspresso (a Facebook Ads tool ) didn’t have a bulletproof answer and they decided to run an experiment and invested $1,200 to find the “scientific” answer!

Keep on reading to learn which was the winning format.

Everything started at the end of last year:

Moving forward, we recommend that you leverage 1:1 (square) image creatives for your image link ads.

Now you will see new recommended image specs (1080 x 1080 pixels, 1:1 image ratio) in Ads Manager when you create an image link ad. There will also be a notification in the image cropping tool, which will default to 1:1 cropping.

To explain further, when advertising in the Facebook newsfeed the ad images have always been cropped to a landscape 1.9:1 ratio, with a recommended size of 1200 x 628 pixels. This specification was decided upon years ago, when most Facebook usage was on desktop and users mainly uploaded landscape images from their standalone digital cameras.

Things have changed since then.

Over 90% of Facebook usage is now on mobile, most people upload photos in portrait orientation from their cell phone and everyone is used to square images on Instagram. Having to use landscape images for advertising has caused confusion for Facebook advertisers and graphic designers alike, for three main reasons:

So, which format should you use?

AdEspresso had installed the Facebook pixel on the thank you page which was reached after registering to download the book and so they could measure cost per lead.

They tested two creativities which were as identical as possible apart from their image orientation.

The ad text, headline, and call to action were kept constant.

The ads they produced are shown below:

There was one ad per adset, this allowed to give exactly the same budget to each ad.

Targeted the US only and left the age range as the default 18-65+.

Optimized for conversions based on the Lead pixel firing on the thank you page.

The assumption was that square would work better for two main reasons:

Based on this the hypothesis was:

Overall, square images would give the lowest CPA

The assumption was that:

The aggregated results for all the ads together are as follows:

All of the main metrics were fairly consistent throughout the four days that the experiment ran.

Next, let’s have a look at the “Square vs. Landscape” split test, aggregated across all platforms:

To really understand what’s working it’s best to split the results by placement. 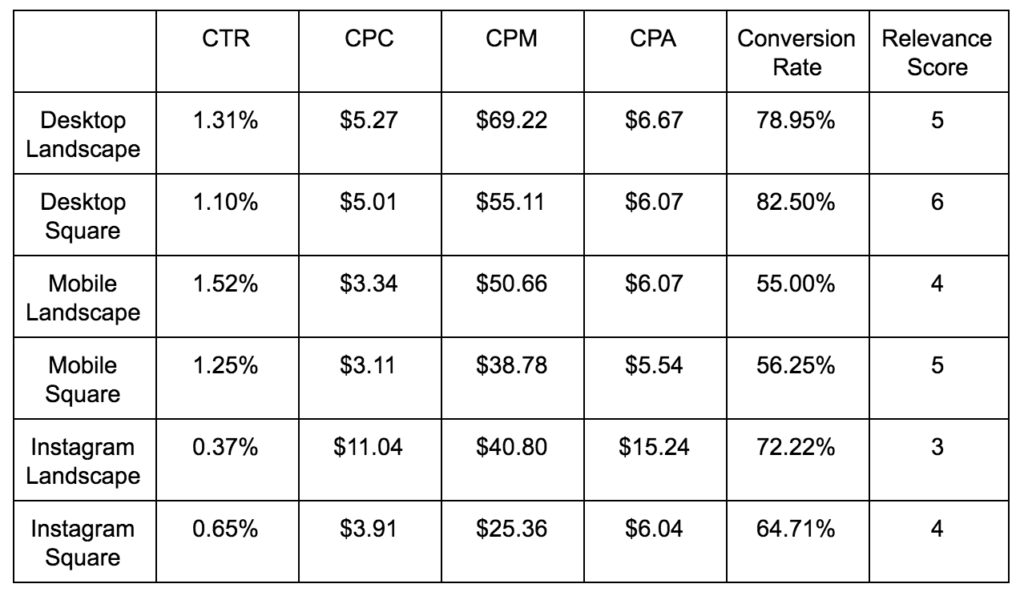 There are two headline conclusions:

For desktop and mobile, the difference was much less at just under 10%.

This is to be expected, most organic content on Instagram uses square and when a landscape image appears in the feed, users assume it will be an advert and scroll right past it.

For Newsfeed, a mix of image ratios is used for organic content and so each post is scanned by the viewer before deciding whether to take action or move on.

The results created some surprises though.

AdEspresso expected square images to produce more clicks as they take up a lot more screen space, resulting in a higher CTR and a lower CPC and possibly a higher conversion rate.

However, what they actually discovered was that for mobile and desktop the CTR was actually lower for square images.

Curiously, it was a lower CPM that made the most difference to the CPC and CPA for newsfeed ads.

Facebook is giving the new format priority in the ad auction, this could be intentional or it could be that the larger ads are more engaging and producing higher relevance scores which can help to lower CPM.

Often a new ad format is given preference by Facebook, for example when video ads first came out, and the same again when Facebook Live could first be boosted. It would be interesting to see the difference in CPM a year from now.

This is not what they experienced in this test, although they do agree that square images are better for CPA.

Both the hypothesis and results agree that square images work better than landscape ones.

So while you should still test what works best for your business it’s best if you move all campaigns to square images as soon as possible.

If you’ve been advertising for a while you may have built up a library of landscape images. It would be worth taking the time to convert anything that you intend to use again to square, and definitely convert anything you currently have running.

The good news is that going forward, the elimination of landscape should greatly help your design team.

As Instagram Stories are becoming more and more popular it has been getting increasingly difficult to produce content for newsfeed ads in 1.9:1 landscape at the same time as producing a 9:16 portrait version for Stories.

With this change, it’s easier to produce content in portrait format for Stories and then crop it to the square one.

PS. If Facebook is willing to give you a helping hand and provide you with “free” lower CPAs, take advantage of it! No doubt, they’re doing it in their own interest so you can take care of your own too, while it lasts.