If you’re wasting time and money each month on Facebook advertising and not seeing results, there’s a good chance you aren’t setting up your campaigns in a way that takes into consideration where the audience is along the buyer’s journey .

This article will show you an example of an eCommerce furniture store that had been spending over $2,000/mo on their social campaigns and seeing a ROAS (return on ad spend) of 0. This company specialized in a niche furniture style and had an average order value at the time of around $1,300. For confidentiality, let’s call the company Artisan Furniture Co. (Artisan for short).

Below you will see a number of common tactical mistakes Artisan had made in setting up their campaign, but more importantly, you’ll see how to use ‘See, Think, Do’ Facebook ad strategy to significantly improve the ROAS. 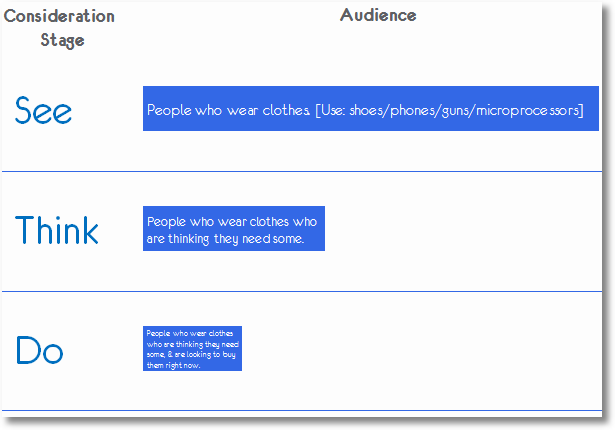 The essence of the ‘See, Think, Do’ Facebook ad strategy is to create specific campaigns with different targeting, creative, and calls-to-action setup for each stage of the funnel . When applied, it often looks something like this:

Typically, these ads are more likely to generate sales because of all the work that’s been done to put them in front of the right people at the right time.

First,  the tactical mistakes uncovered during the audit  of this furniture company:

Then, you’ll see the exact process which was implemented to increase Artisan’s ROAS from 0 to 29.5 in just 3 months ⁠— which means, for every dollar spent on the campaign, they got almost $30 back.

The list of tactical mistakes Artisan had been making, along with a brief explanation of each one.

Not Transitioning from High-Funnel to Low-Funnel Campaign Objectives

One out of their two ads used the campaign objective of engagement which shows your ads in the news feed of people who are most likely to like, share, and comment on your post.

While likes and comments can be useful for developing social proof, engagement alone will not typically result in conversions and purchases.

In some cases, engagement can be used in the beginning stages of a broad awareness campaign, but eventually, you’ll want to make a shift to the campaign objectives of traffic and conversions that are more likely to get you the results you’re looking for.

There had been just two ads running for their 3-month campaign, with zero copy and image variations.

The problem with this is  that a message that’s going to resonate and compel Facebook users at the top of the funnel, isn’t necessarily going to have the same effect on an audience member further down the funnel , and vice versa.

When developing paid social campaigns, it’s essential to develop a variety of creative ads to show tailored messages to your audience at different parts of the funnel.

Defining the Audience Too Broadly

Upon reviewing the designated audience for their campaigns, it came out they had lumped together a wide array of interests into a single audience. Interests like “Mother’s Day Gifts and Wishes” were alongside completely unrelated interests like “New Home Sales.”

If you’re beginning with a general prospecting campaign and you want to explore whether or not people with these interests might be interested in your products, the better approach is to split these interests out into separate campaigns with custom audiences, and create different ads for them.

For example, if you were running an ad around Mother’s Day, you would create an ad with copy that specifically talks about “Mother’s Day Sale” or “Give your mom a gift that lasts.”

Letting the Frequency Rate Get Too High

With a frequency rate of 2.5, on average people were seeing their engagement campaign two and a half times. When you’re targeting people this high in the funnel, there are a couple of reasons you are better off managing your frequency rate so that it’s less than 2.

By managing your frequency rate and keeping it less than 2, your prospecting ads will reach more potential customers and be less likely to result in hides and dislikes .

Using a Default Setting of Link Clicks for a Traffic Campaign

When you choose a traffic campaign objective, there is a section titled “Delivery Optimization” where you can tell Facebook to either optimize for link clicks or for landing page views.

Then you have a qualified session and you will see lower bounce rates, a longer average session duration, and higher page depths.

Not Setting Up URL Tags

Without setting up URL tags, when you go to Google Analytics, everything shows up as referral traffic, and you’re left without knowing whether someone came from the Facebook page where they saw your ad, or from somewhere else.

URL tags help you understand which ads are working and which are not, where you’re getting a return on your purchase, where you need to tweak messaging and targeting, and when you need to stop a campaign altogether. By taking the time to set up URL tags properly, you will collect the data that you need to make smart decisions about your campaigns.

Previously, Artisan had spent 74% of their budget on an engagement campaign. This can be useful during general prospecting in the ‘See’ phase, but without narrowing down the audience and delivering new ads in the ‘Think’ and ‘Do’ stages, they weren’t able to get the conversions they were looking for.

Let’s take a look at how the three phases of ‘See, Think, Do’ were strategically executed by using different campaign objectives and creative ads.

Changes in the ‘See’ Phase

First came the kick-off with a reach campaign. The reach campaign helped to get the brand in front of the eyes of a broader audience of potential customers that were high in the funnel.

In parallel to the reach campaign, a video view campaign was also launched as another element of general prospecting and effort to gain brand recognition with the new audience. This allowed to build some awareness of Artisan and also begin narrowing down the audience for the ‘Think’ phase of our campaign.

Changes in the ‘Think’ Phase

Whereas before Artisan was running their engagement (‘See’ phase) and traffic (‘Think’ phase) campaigns with essentially the same audience, the information gathered in the ‘See’ phase was used to update and refine the audience for the ‘Think’ phase. So when it was time to run the traffic campaign, after the success of the reach and video view campaigns, the leads visiting Artisan’s site were significantly more qualified.

Benefits for the ‘Do’ Phase

By the time of entering the ‘Do’ phase with the conversion campaign, the audience was already familiar with the brand and the products, and they were that much more prepared to take the action the company was looking for: to make purchases of their unique furniture.

This is what the ‘See, Think, Do’ Facebook ad strategy can do when it’s applied in the right way.

So now that you understand the strategy, here are the tactical specifics and steps we took when we executed the campaign.

The Exact Steps to Execute ‘See, Think, Do’

Successful marketing depends on delivering the right messages, to the right people, at the right times. The ‘See, Think, Do’ framework allows you to do just that.

Nurturing interested audience members down the funnel (while not asking for too much from the customer right away) is key. While customers get to know your brand in a way that’s educational and informational, you can identify qualified users along the way  — which will ultimately help you to deliver relevant messages to people that want them.

That’s how you’ll increase your ROAS for paid social campaigns.

Facebook Ads Case Study for a Furniture eCommerce Site: ROAS From 0 to 29.5 in 3 Months

PS. Remember to rotate your ad images often. Otherwise your ROAS will quickly drop. With proper rotation you can run it pretty much evergreen.