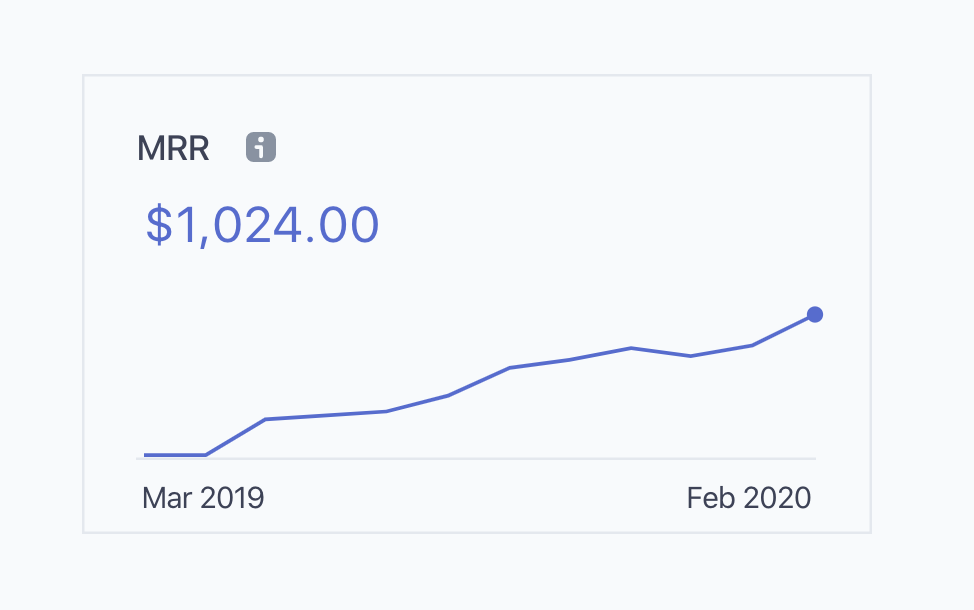 While learning about growing a company from $100k to $1m in monthly revenue is exciting, it might be more interesting and insightful to read about a journey from $0 to $1k. This is what today’s article is about. The product is Pigeon, a CRM built inside Gmail. The following is by Pat Walls, Pigeon founder.

Over the past year, I’ve been working on a product called Pigeon.

I built this product to solve my own needs for Starter Story as we needed a CRM tool built inside Gmail to help us scale the business, and the existing tools weren’t cutting it.

Anyways, Pigeon just hit $1K MRR, and for me, it’s been a pretty crazy and unexpected journey, and I learned a lot.

DISCLAIMER: If you’re looking for a case study about how to grow a SaaS fast, this is probably not the one. This is mostly a look back at how I slowly reached 40 paying customers, what worked, what struggles I faced, and what I learned.

To be honest, I didn’t expect how hard this would be.

Why? Because Starter Story grew a lot faster and felt “easier” to get to that $1K revenue milestone in the early days. Building Starter Story was not easy by any means, but I thought that maybe my “success” at Starter Story would enable faster success at Pigeon – that wasn’t the case.

Not all revenue is created equal, and for me, building a SaaS was a new type of challenge and I feel like $1K is a good milestone to reflect! And not because it’s $1,000, but because it equates to about 40 paying customers, which feels like a lot (for me).

It also feels like a big milestone because I worked so damn hard to get here. Every customer felt like a big win, and every churn, lost opportunity, etc felt like a loss.

So, I wanted to write my thoughts while they’re still fresh and show you the real truth & honesty behind the last 10 months.

Maybe it helps someone out there going through a similar thing.

Growth was a lot slower than expected.

I was able to launch the product to about 7 paying customers in May 2019. This is because I had built up a small list of people interested in the product.

This gave me pressure to launch (which helped me launch faster) but it also led to some overconfidence since I was able to launch with about $300 MRR, I felt like I was on top of the world!

But in the month after I launched (June), I only added 1 paying customer!! 1 CUSTOMER!! It’s pretty crazy to be working so hard on something and you only have 1 person sign up in 30 days.

And the next month after that? 2 CUSTOMERS!!

But this isn’t a pity party.

In my opinion, having even just 1 paying customer is a blessing, or at least I kept telling myself that. As long as *one person* is getting value out of your product, there’s bound to be more, you just need to find them.

Churn is real and it sucks

I’ve never built a SaaS before, so I never really experienced churn first-hand.

Personally, every churn felt like a gut punch, especially in the early days, when things were less validated and I associated the success of the product with my own self-worth (I do that less now).

It also hurt because I built close relationships with my customers. For 90% of my customers, we started out with a video call before they even purchased the product (more on that later), and often had many support chats and emails back and forth throughout the onboarding process.

Eventually, I got better at dealing with “rejection” though (mostly). Some things that help:

Mentally, I also went through some hard times. Not all bad though, but there were definitely some days… Being a solo founder certainly doesn’t help here either.

I got a YC interview that completely sidetracked me, and getting rejected from that felt like a gut punch because of all the work I put into prepping. I didn’t expect to get in, nor do I regret applying, but the interview process consumed my mind for a 2-3 week period back in October. Not much work on the product got done during those weeks, and when I look back at that “YC time” I remember feeling very stressed and unhappy.

In general, the “slow growth” got to me, at times. Compared to Starter Story, it felt like I was working double overtime to make a nickel.

But I did find some coping mechanisms for this self-doubt, here are a few:

I’m not going to go into much of the minutiae of the Google security audit, but I didn’t find out about it until right before I launched.

Basically, this Google audit would force me to pay $15K+ before I could even launch and validate the product. This was another gut punch, and this bullshit initiative by Google consumed my mind for way too long.

But I found a workaround.

Before paying this egregious sum, you can have an “unverified app” with up to 100 users – and stay unverified.

One issue – anyone authing to Google would get a massive error screen that looks like this: 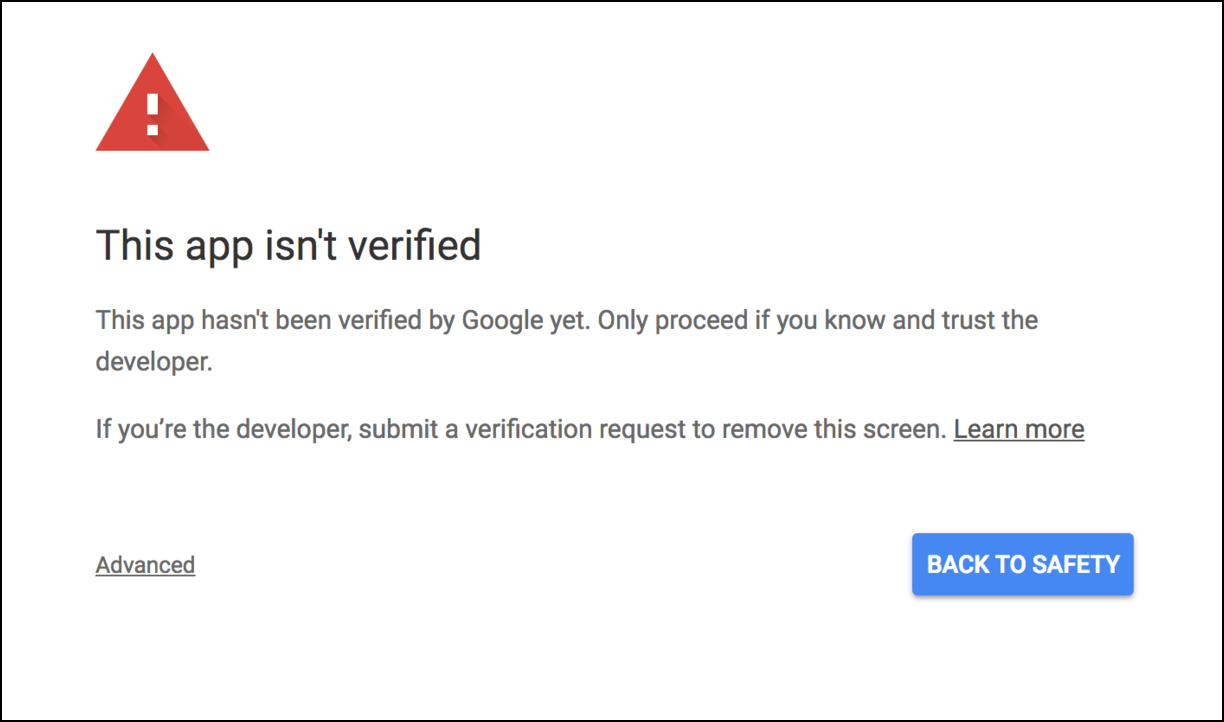 I could make this work, but I had to accept a couple of things:

How to get around the danger screen issue? Direct sales. I would do a Google Hangouts call with every new prospect to learn more about their use case and give them a demo. Once they agreed they wanted to try the product, I would explain to them the unverified app situation and hopefully still make the sale.

The calls were extremely time consuming, and often led to no sale (or even no shows), however, I think this may have been a blessing in disguise. I learned a lot about direct sales, customers, the market, and even made some personal relationships with my customers. And the product has made some massive improvements over the months.

However, I would just like to say that I think it’s ludicrous how Google has set this whole security audit thing up. In my opinion, this will kill innovation and indie developers will simply choose not to build apps on Gmail’s APIs. If anyone has questions about the Google security audit – feel free to reach out.

I hope that some of the stuff above here helps other founders. For me, the mental side of things were my biggest lessons learned.

But let’s talk about what worked:

I’ve built up a small list (about 500 now) of people interested in Pigeon. I collected the emails pre-launch and through the website/Chrome extension.

Since the email list also includes active customers, I do weekly feature and product announcements to that list.

This does two things:

I try to send a newsletter every week, and my feature cycle started to groove with that. It actually acted as a nice productivity boost.

People love to see that you’re actively working on the product and improving it, whether that’s prospects or customers.

Every little thing (whether it’s a new feature, blog post, or customer testimonial) is an opportunity for marketing! I also would take the email announcements and put them on Twitter as well.

Example newsletter from this week: 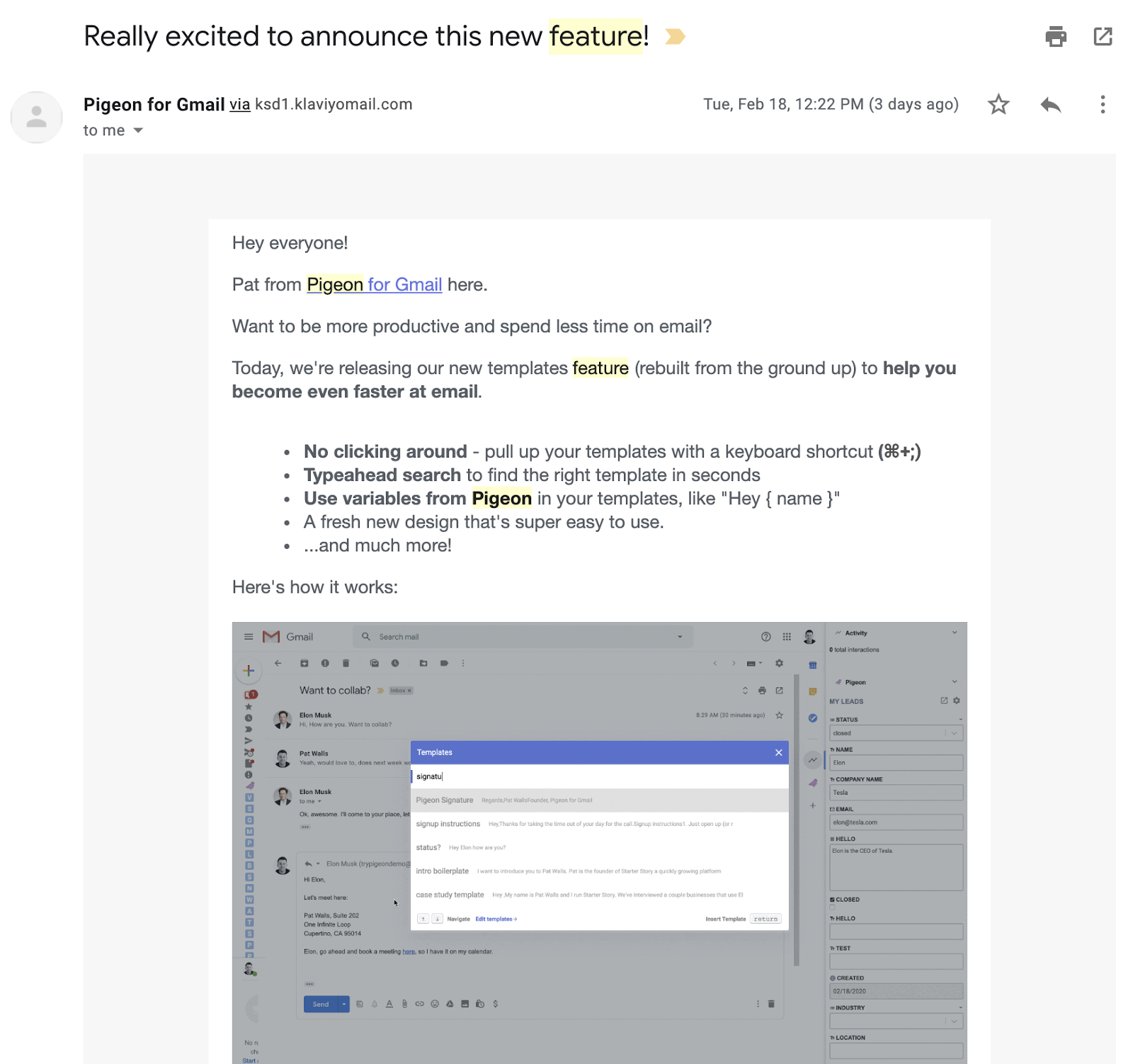 Talk to customers (not what you think)

This doesn’t mean you need to call your customers on the phone or meet them at coffee shops. Just put a chat popup thingy on your site and chat with them over email – it doesn’t even have to be about your product.

For me, the chat thingy has been huge. It’s served three great purposes:

I talked about this in the Google audit section, but Google essentially forced my hand into doing direct sales.

Because I couldn’t have people sign up on their own, I would collect emails as a “request access” call-to-action on my landing page: 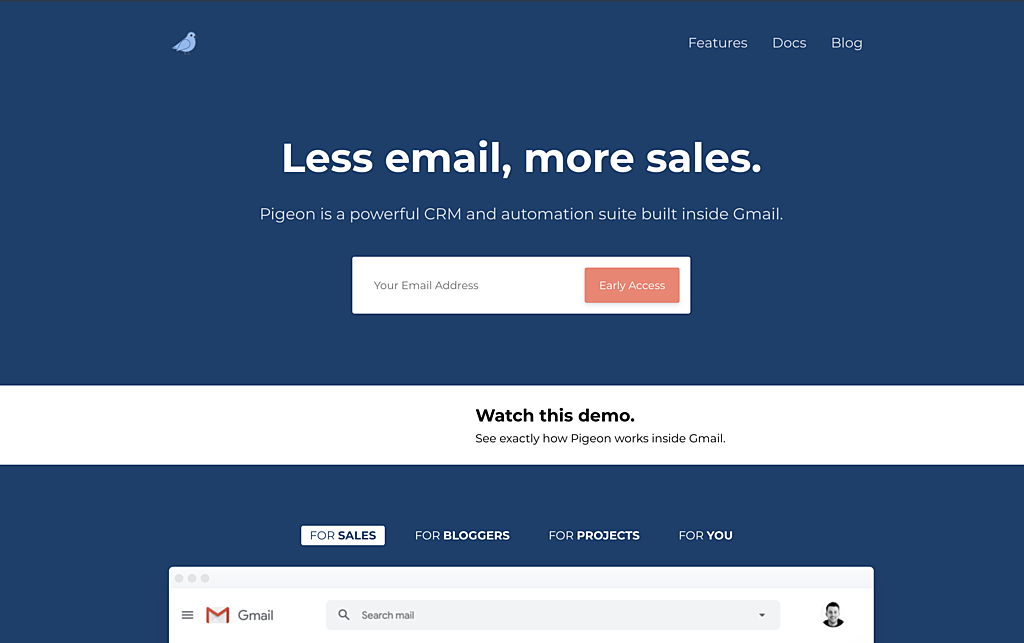 Landing page before the Google Audit was complete

Once I got their email there, we would have a small chat over email, and then I would ask them if they would be willing to jump on a 30-minute meeting (through Calendly) and have a face to face video conversation about their use case and give them a demo of the product.

I got this idea from Superhuman (kind of) as they require an onboarding video call session for every new user.

I did this “direct sales” method for the first 6 months. At first, I was a nervous wreck for these calls. But after about 10 of them, it was easy and natural.

These calls were not always successful. Sometimes nobody would show up. Sometimes people would say they’d buy the product, but never actually commit. However, these calls were invaluable in understanding my customers, building personal connections, learning how to sell, and to validate the product.

I have a lot of customers tell me they found me through Quora as I did a bit of posting there in the early days.

This was great, not only because it brought in many customers, but because it meant people were actually searching for the solutions Pigeon offered.

When I interview founders at Starter Story, I always ask how they keep customers and grow their business.

A common answer is to “provide great customer support and customer experience”. When I heard this, I never actually believed that support could lead to growth, but now that I’m on the other side, I can see that it can!

Customers really do appreciate great customer support and it does go a long way, and it may be the difference between someone picking your solution over another.

If you check out our ratings on the Chrome web store, you can see a lot of reviews talk about me and the care that I put in the product and customer experience.

I know this isn’t scalable forever, but it’s one of those things that is super easy to get right.

Now that the whole Google debacle is settled (I’ve completed the audit) and we added a free trial, things *feel* like they are picking up.

In the past 4 weeks, MRR has gone up 40%, and while in the first month I got one new signup/month, nowadays I’m seeing more like one signup per day.

I recently came across this graph from Baremetics on how fast companies hit ARR milestones: 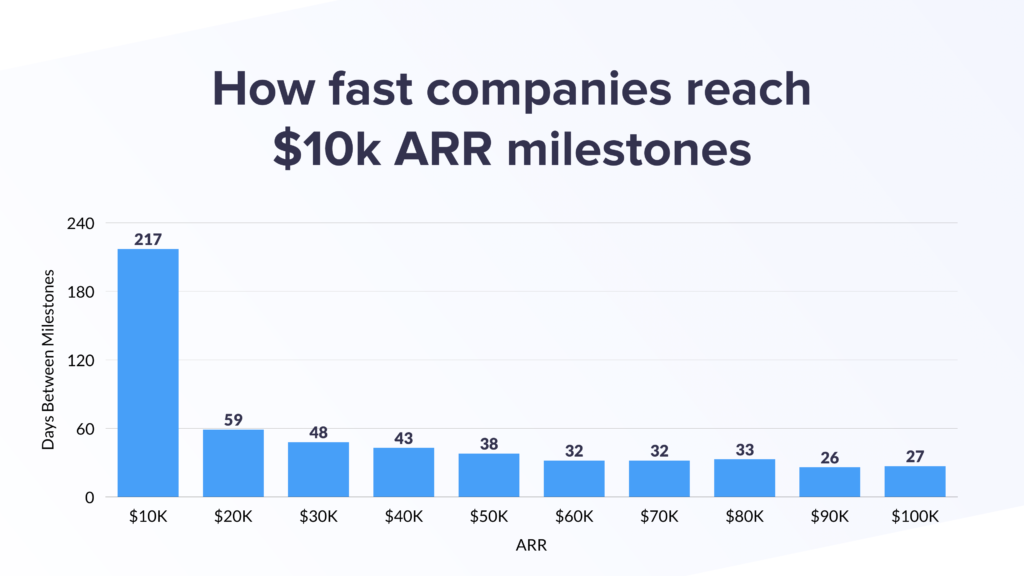 I wish I’d seen this before, because it really shows how much longer it takes to get from 0-10k ARR than $10-20k ARR. Although Pigeon’s growth seems to be slower than the average, the recent growth I’ve experienced past $800MRR has been faster. This graph gives me confidence.

Over the next few months, I’m focused on delivering more features and improving the product as usual, and eventually launching a freemium version of the product.

Perseverance, sales, customer support. Eventually, you’ll get there (if the product is good).

PS. And trust. You can never have too much of it but in the beginning, it’ll make or break your business.