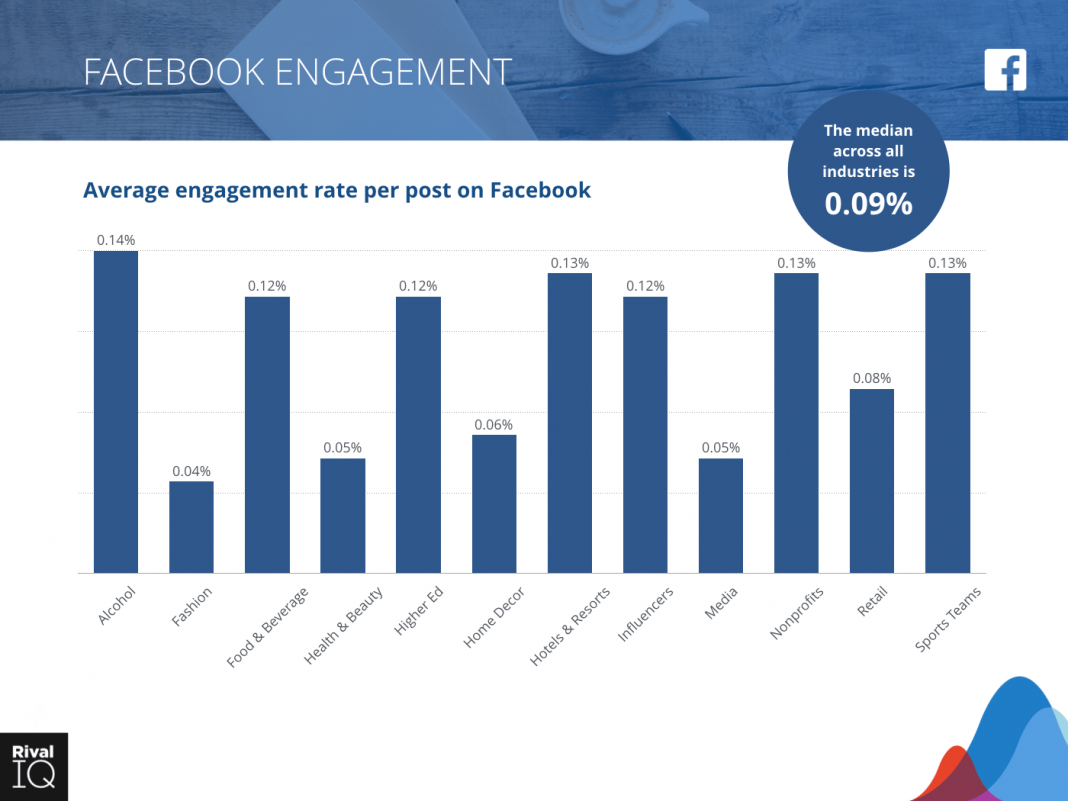 Facebook used to be the holy grail for online marketing. If you asked a publisher where the majority of their traffic came from in 2016, chances are they’d tell you it came from Facebook. And they didn’t have to spend a penny for it.

Then Facebook changed its newsfeed algorithm. Some of the changes included:

Were these changes all great for the end user? Sure. They were great for Facebook’s bottom line, too, because the updates forced brands to pay to promote posts that would otherwise likely go unseen. But brands took a huge traffic hit. Some even went out of business.

So should you delete your Facebook business pages and focus your efforts on another social platform? Unfortunately, it’s not that simple. Facebook has 1.5 billion daily active users – the only two websites on the entire Internet that get more traffic are Google and YouTube. It’s where your users are, so you need to be there, too.

Facebook marketing in 2019 looks a lot different than it did in 2016. That doesn’t mean it’s not still a potentially viable traffic source. It just means that you need to be more strategic about how you leverage it.

When It Comes to Posting, Less Is More

In the golden days of Facebook marketing, the prevailing strategy for brands was to post multiple times each day. That way, people who followed your brand would likely see a post regardless of when they logged on.

Today, brands that post multiple times per day risk being demoted for spammy practices. Plus, users are now accustomed to seeing fewer content pieces from brands. The more they see from a single source that isn’t a family member or friend, the more likely they are to snooze or unfollow that page’s content.

Engagement is really important for making sure you show up in the newsfeed. The median engagement rate for a Facebook post is .09%: 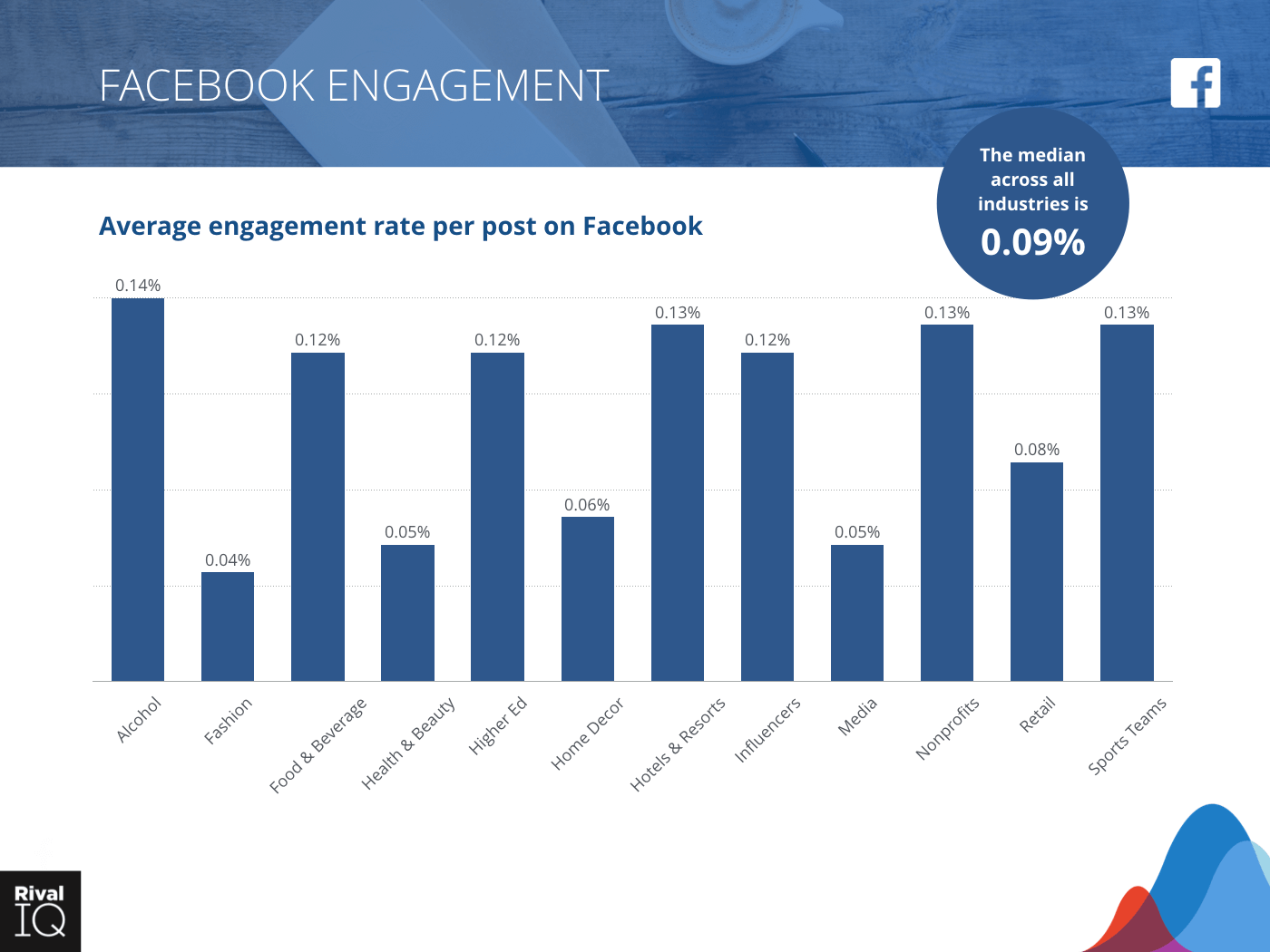 That’s a terrible number. It was also terrible last year, at .16%, but Facebook’s push to prioritize content from friends and family in 2018 made it even worse. If users see your posts in their newsfeeds and don’t engage, you’re going to show up even less.

Limit your Facebook posts to one or two per day.

As with most things in marketing, there’s no magic number. But a good rule of thumb is that it’s better to post too little than too much on Facebook.

Experiment with one per day for a week. Then two. See which one brings you more traffic and engagement, and then stick to that schedule.

Not only are you potentially hurting your Facebook page’s effectiveness if you post too much, you’re also wasting time that could be better spent on other marketing channels and tactics.

Let’s say you’ve determined that one post per day is what’s going to bring you the best results. Now, how do you make sure that post gets seen? There are a lot of ways, and the more of them you try, the better chance you’ll have of showing up in newsfeeds.

Focus on Quality, Not Quantity

If you’re posting less often, you have the time to make sure each post is something that will boost engagement. Don’t skimp here.

Videos that tend to get a lot of engagement include quick tips, product demos or testimonials. Avoid videos that function like commercials. Instead, create something that really adds value for your followers.

You’ve probably read more than one article that tells you the best days and times to post on each social media network, including Facebook. Here’s why you should ignore them: every audience is different.

Think of it this way. If your target audience is marketers, they’re probably going to be on social media all day long. But what if your audience is teachers? There’s a good chance they won’t be logging on at all between 8:00 a.m. and 3:00 p.m. And if you want to reach stay-at-home moms? Early mornings, late evenings and nighttime when the kids are at school or in bed will probably be your sweet spot.

The good news is, it’s easy to figure out when your audience is online. It’s right there in Facebook Audience Insights. From there, you can test posting different content types at the best times, and figure out an effective content calendar and posting schedule for your brand.

If you want higher engagement and more visibility on Facebook, you need to start a conversation. But you also need to be careful about how you do it.

“Engagement bait” posts – the ones that explicitly asked a user to like or share a post– used to be really popular. They were effective, too. As Facebook’s algorithms evolved, however, those posts got demoted.

That doesn’t mean you shouldn’t try to get your audience talking. It just means that you have to make the interactions meaningful. Here’s an example:

Two more ways to spark engagement are by posting content that appeals to users’ emotions and finding a way to tie in a current event that everyone has an opinion about. A relevant quote that a user can relate to will result in likes, shares and comments. So will referencing a hot news story, especially if it’s one that’s provoking mixed reactions among your audience.

Facebook’s Audience Optimization is a new organic targeting tool that allows pages to target posts to those who are most likely to engage with them. This tool is useful if you have:

Audience Optimization replaces the previous Interest Targeting feature, and is automatically activated on pages that have 5,000 or more likes (those that haven’t hit this metric can manually turn it on within their page’s Settings). Once activated, use this tool to help Facebook “prioritize posts that are most likely to be engaging for a person without limiting visibility for others.”

Chances are you have some older content that has been a major traffic driver for you. If it’s evergreen, there’s no reason not to keep it in the posting rotation. Users won’t see it as often as they would have in the past, and when they do, they’ll be more likely to engage with it.

This probably doesn’t need to be said, but make sure that any older content you’re posting is up-to-date, with no broken links or outdated information. And make sure to swap out the featured image and description text every now and then to keep it fresh.

Think Beyond the Newsfeed

As businesses continue to find Facebook newsfeed algorithm channels pushing their content into obscurity, some are finding creative ways to market on Facebook outside of the newsfeed. Here are some of the ways they’re doing it:

If you have a large number of followers, creating a Facebook group is a great way to keep them engaged through discussions. Your group shouldn’t just be about your business, though. Just keep it industry-focused.

For example, if you’re an SEO business, create a group focused on sharing SEO tips and tricks. In between discussions, you can promote your SEO-related content. Becoming active in other groups in your industry will also help raise your company’s profile. Groups devoted to challenges – such as “30 Days to Better SEO” – also see high levels of joins and engagement.

More than one billion people use Facebook Messenger. As it’s a relatively new marketing channel, businesses are currently experimenting with different ways to use it to engage customers. As an example, HubSpot experimented with using it to deliver content, and ended up with a whopping 80% open rate.

The use of chatbots in Messenger is growing as well – and it works. Sephora used a chatbot to book in-store services and saw an 11% increase in bookings, not to mention increased sales from those bookings.

Utilizing these alternate Facebook channels may take some trial and error, but if you can crack them, you’ll have to rely less on newsfeed for organic reach.

It Pays to Boost Posts

In 2019, the reality is that you have to pay to play on Facebook. Boosting your organic reach is vital, but it can only get you so far. If you want to significantly grow your audience – and who doesn’t want that?  – you need to pay for it.

A combination that works well: boosted posts, Facebook Ads and retargeting in addition to trying to increase organic reach. Don’t boost every post, just the ones that you know will get engagement.

At some point, even the best organic reach strategies are going to fizzle out, and it’s likely that Facebook will become a strictly paid platform for advertisers at some point in the future. Luckily, it’s a relatively cheap platform to advertise on, and the extensive targeting options make it a really effective one.

How we use Facebook for marketing will continue to evolve, but in the near future there probably won’t be a time when it won’t be a necessary marketing channel for most businesses.

PS. Every quarter or so, assume that your knowledge about best practices is outdated, and test again. See if posting once or twice per day still gives you the best results. Or if chatbots or ads are still effective. The algorithms change all the time.