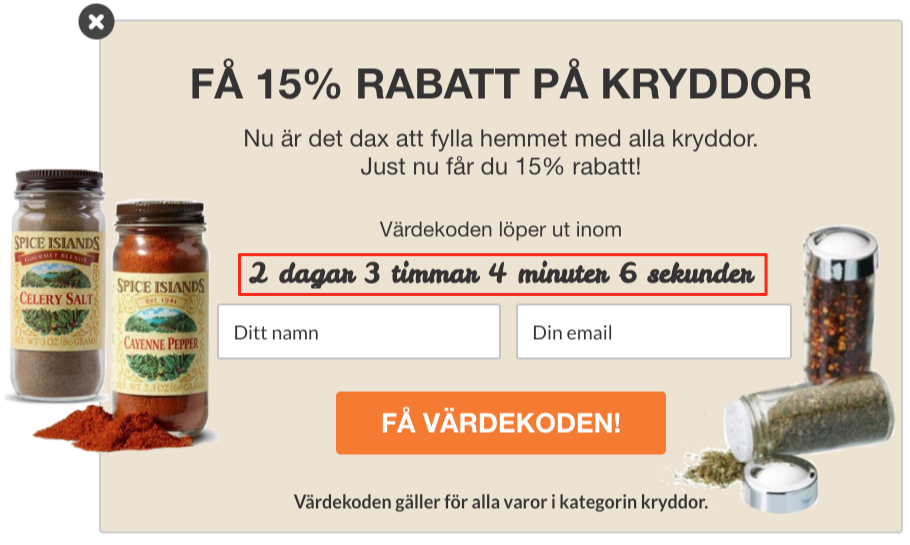 This article will show how to create a high-converting popup, element by element.

The best part? The findings are based on real numbers pulled from Sleeknote’s top-performing customers, which, all in all, accounted for 1+ billion popup views.

How to Build a High-Converting Popup (Backed by Data)

1. The One Element Your Popup MUST Have

We all know images can increase conversions.

But can images increase popup conversions? Put another way, can adding an image to a popup without one increase conversions?

To test this hypothesis, Sleeknote first looked at 20+ million popup views. Then, they filtered out any popups with 2,000 views or less to ensure our overall conversion rate was valid. Finally, they analyzed 1) popups with images and 2) popups without images. 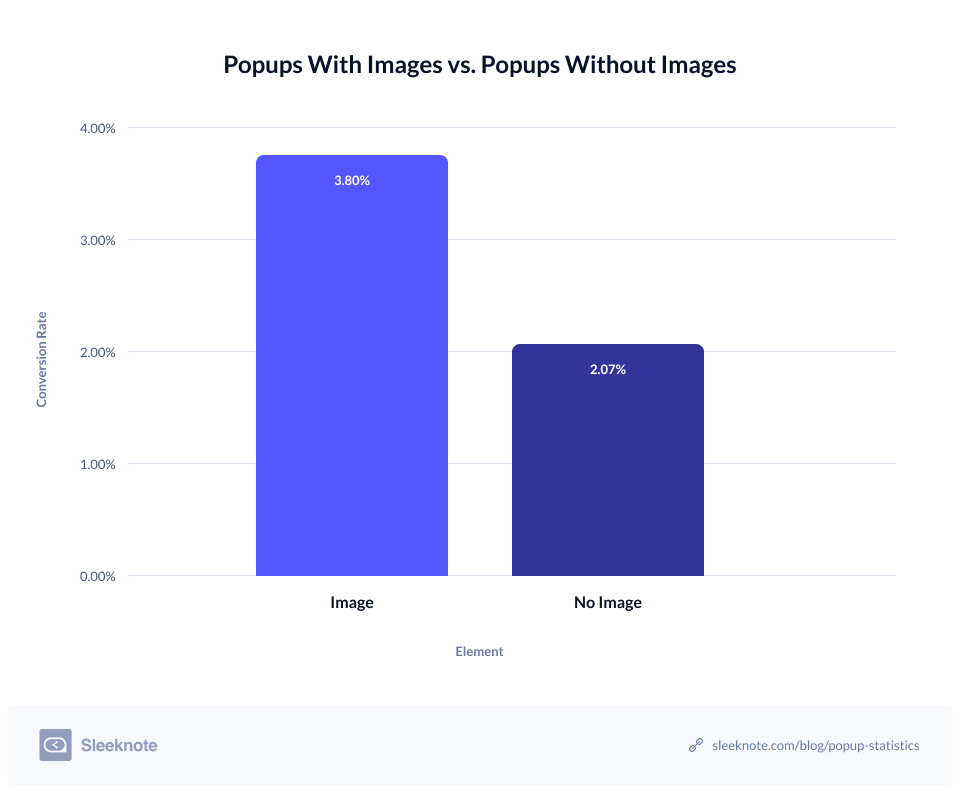 So, if you’re currently using a popup without an image, test it against a popup with an image relating to the offer you’re promoting—you’ll likely see a slight bump in conversions.

Real Coffee, a brand that offers affordable, high-quality Nespresso® and Dolce Gusto® compatible coffee capsules, use an image of a milk frother, (its signup bonus), both, in the teaser—what comes before the popup—and in the popup itself, to invite visitors to learn more about its monthly subscription.

And here’s the popup zoomed in:

Popups with an image convert better than those without one.

2. Use This Underused Element to Get More Emails

Like images, urgency, when utilized ethically, also increases conversions. No matter the occasion—a seasonal campaign, a Black Friday promotion, a limited-time offer, the fear of missing out moves on-the-fence buyers to take action.

While urgency is common in email campaigns and on landing pages, Sleeknote wondered whether creating urgency in a popup had a similar effect. However, rather than look at popups creating urgency in copy, they looked at another, often underutilized element: countdown timers. 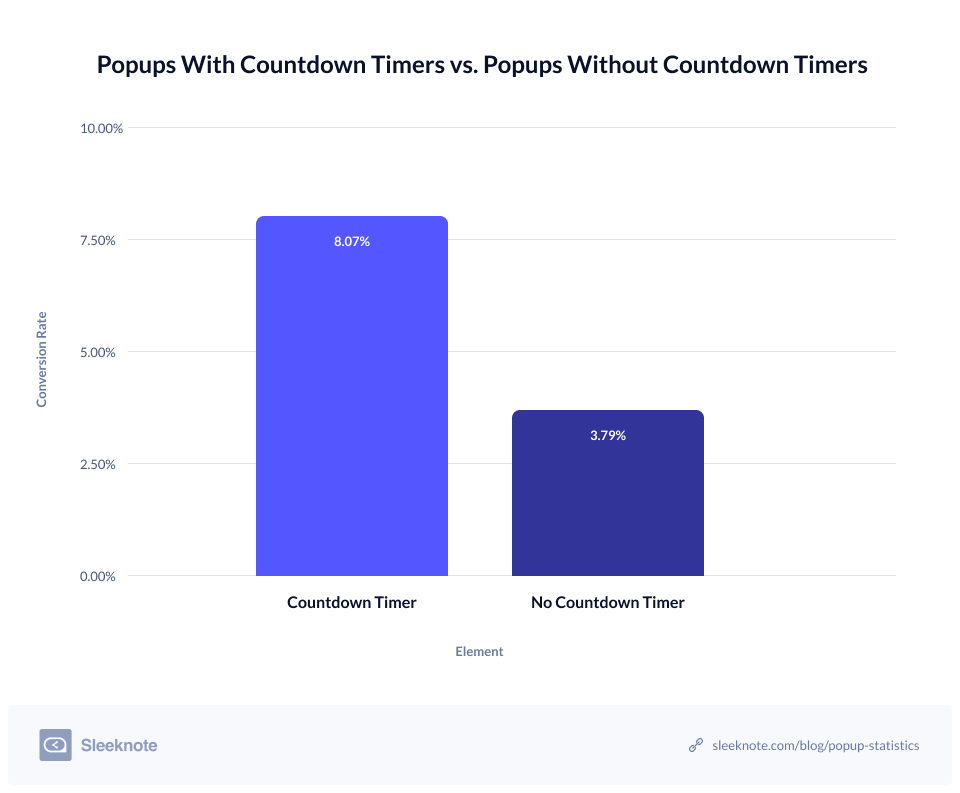 Not all popups need a countdown timer, of course. After all, there’s no urgency for a website visitor to join your email list. But if you’re running a time-sensitive campaign like an on-page giveaway or seasonal promotion, test adding a countdown timer to your popup.

Adding a countdown timer to a popup communicates urgency and moves visitors to action.

3. Input Fields: What You Need to Know

If you’re growing your email list, you likely experience the following:

The question is, is that assumption correct? Do fewer fields really mean fewer conversions? Or is it a rule of thumb that’s now obsolete?

The findings were fascinating. 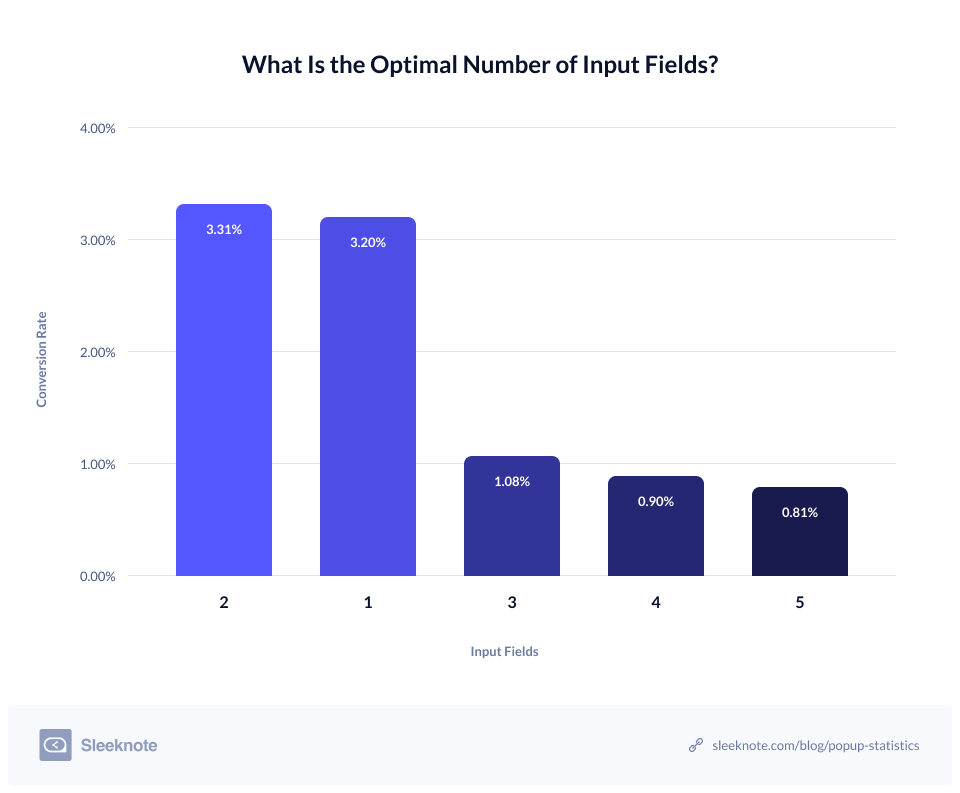 Third:  popups with two input fields (3.31 percent) convert better than popups with one input field (3.20), but only by a marginal 3.32 percent improvement .

There are a few key takeaways here.

4. Multiple Steps: How to Enrich Lead Data (The Right Way)

As mentioned above, enriching lead data without hurting conversions is a problem for many marketers. That’s why you can split the process into multiple steps.

With it, marketers can get a visitor’s email address in the first step (the initial form), and then get more information in the followup step—without losing the visitor’s email if they close the popup. 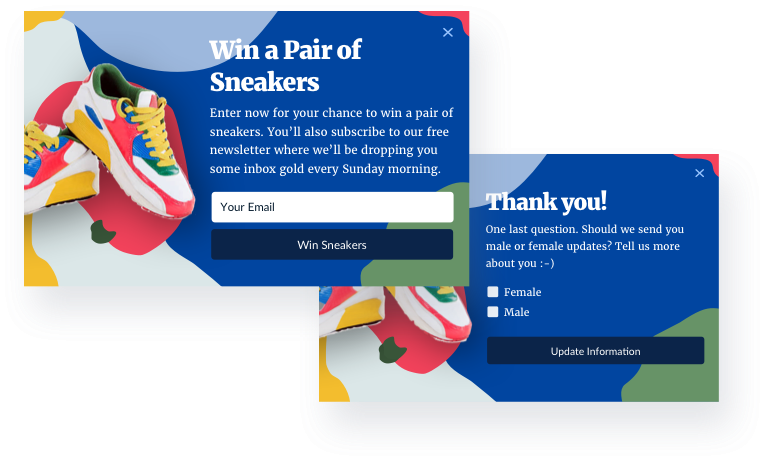 Building on our earlier hypothesis on input fields, we wondered.

Findings: popups that have a second step see a staggering 76 percent of its subscribers input more information. 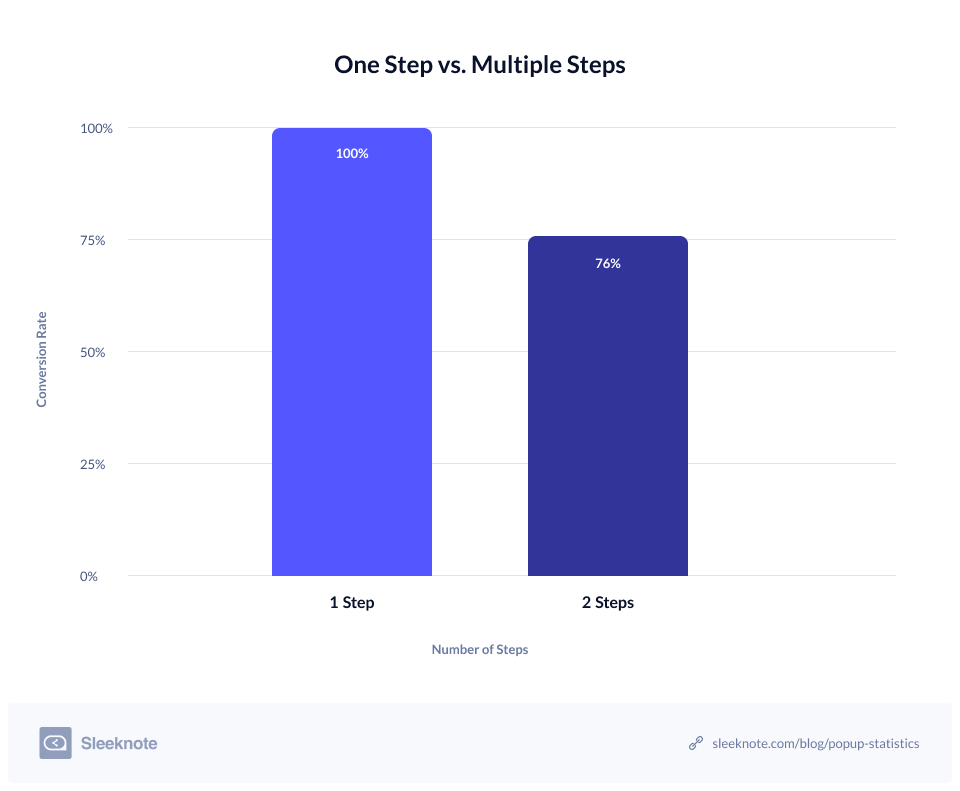 What does this mean for you? Well, with that many subscribers inputting data in the second step, there’s ample room to enrich your lead data—without adding more fields or, most importantly, seeing a dip in conversions.

5. Use a Timed Trigger? Read This

If you’re unfamiliar, a Timed Trigger lets you show your popup based on how much time a visitor spends on a webpage. When the page loads, it starts a timer, and it triggers the popup when the timer reaches the seconds you choose in the settings.

The problem for many brands using popups, though, is knowing when to set the trigger. Without knowing how visitors engage with certain pages, it’s impossible to get accurate insight, save using a metric like average time on page in Google Analytics.

Takeaway:  popups that are shown after eight seconds (3.62) convert better than popups shown before or after . 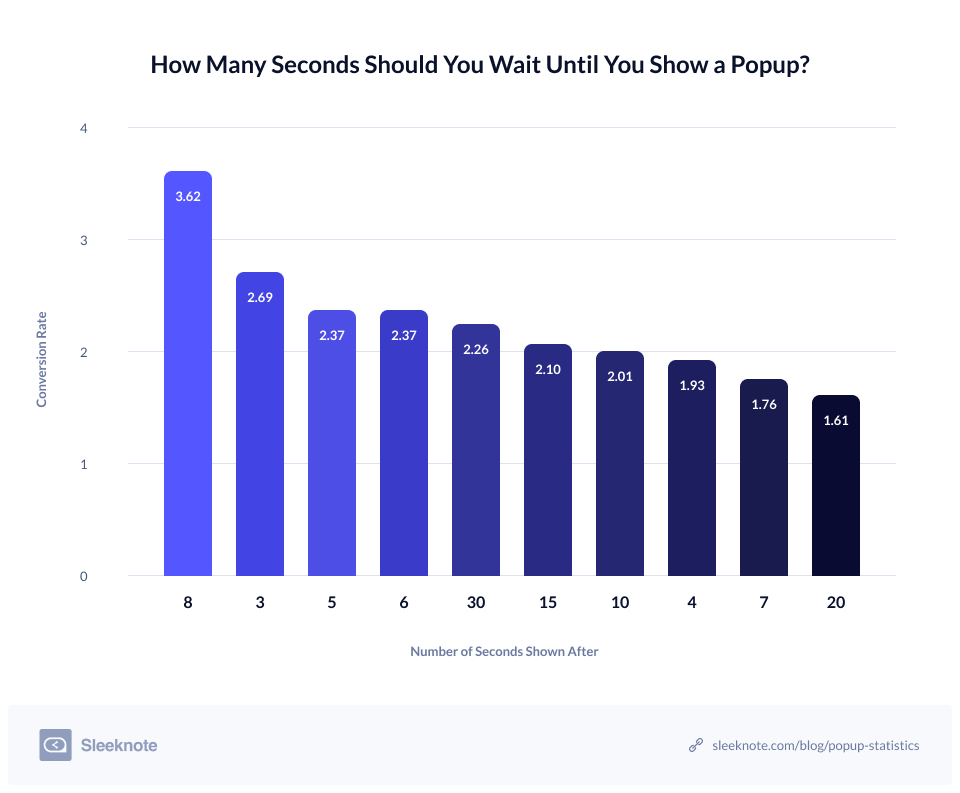 If you’re using a popup with a Timed Trigger, our recommendation is to use eight seconds as an anchor point. You won’t necessarily drive more conversions (your page’s content will influence much of that), but it will give you a good foothold.

6. How to Optimize a Scroll Trigger for Maximum Conversions

One way many online retailers frighten visitors off is by asking for their email too early. Unless visitors are already committed to your brand, being too pushy can push them away.

With a Scroll Trigger, you can ask visitors for their email when they’ve demonstrated their interest by scrolling down the page. However, much like a Timed Trigger, it’s hard to know when to set a popup to show. 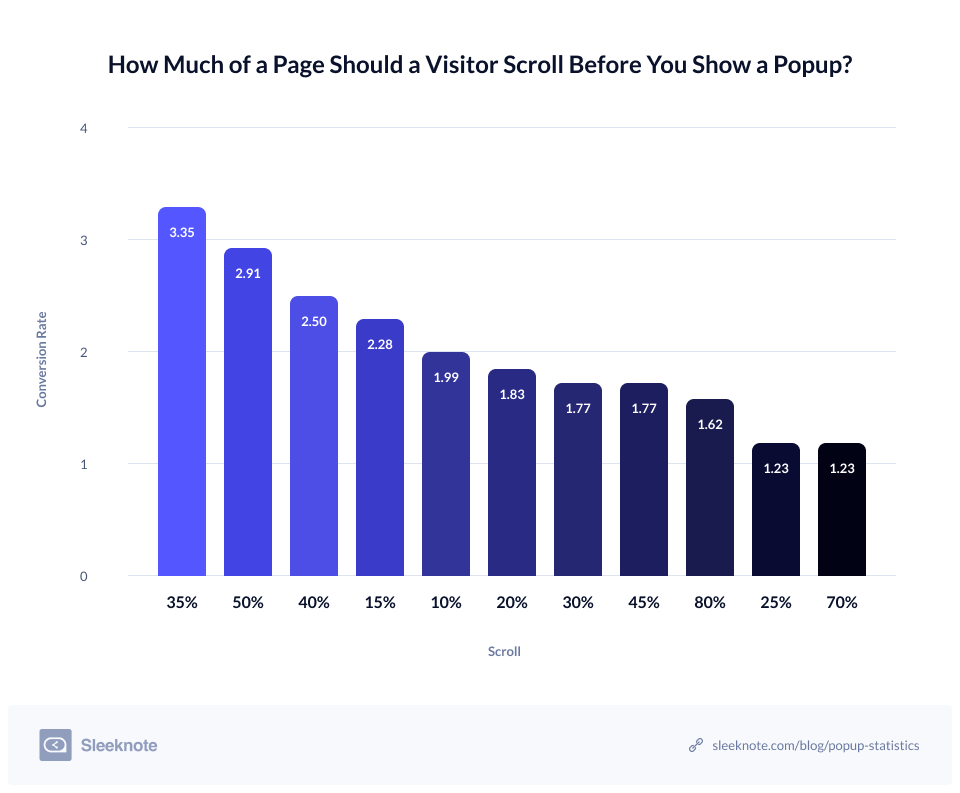 7. Desktop vs. Mobile: Which Is Better? (The Results Will Surprise You)

Even though the number of mobile users is growing, does it convert better than desktop?

Surprisingly,  popups convert better on mobile (5.8 percent) than they do on desktop (3.11 percent) . 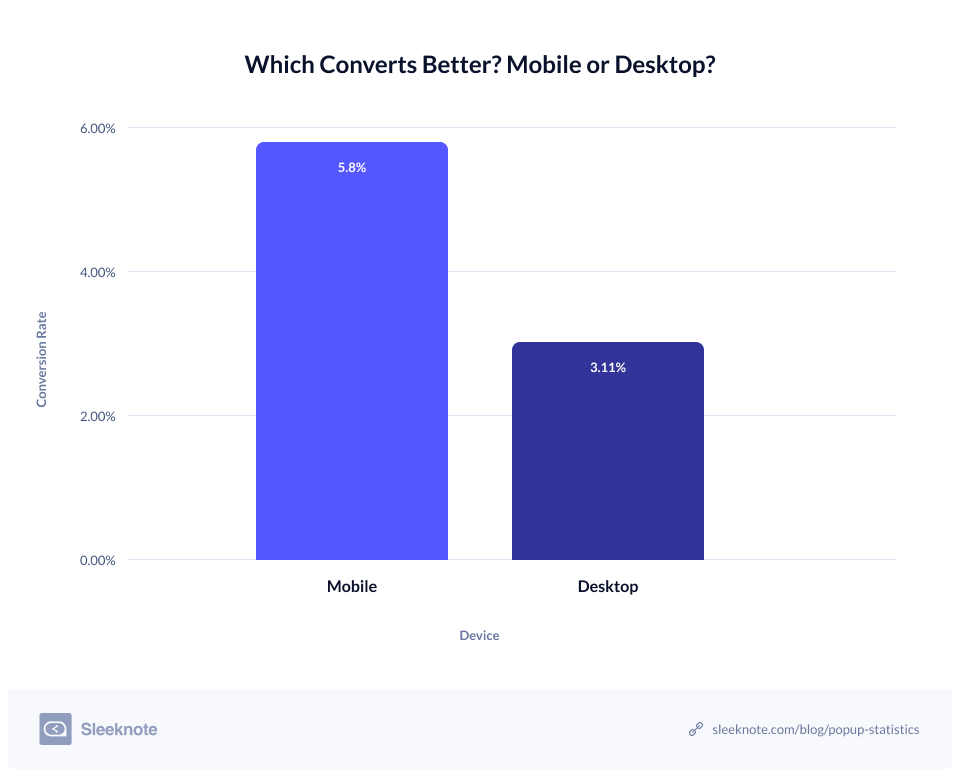 The takeaway, then, is not that mobile is better to desktop, but rather it’s worth having device-specific campaigns.

For instance, if your desktop popup has a lot of copy, you might want to create a mobile-specific popup for better readability. Or, if you want fewer input fields for a mobile popup due to limited screen space, you could differentiate it from its desktop counterpart.

Popups are ugly, intrusive, and above all, hurt the user experience…

But only if you ignore the best practices outlined above.

The popup statistics in this post have shown you how to optimize your popups for maximum conversion.

PS. If you’re triggering your popup as soon as the visitor arrives on the page, they’ll close it faster than it will load and won’t even remember it was there. It’s how people operate: come and close everything that can be closed. GDPR, with all its additional warnings, only added to the problem. Make your popup different and never show it at the start.