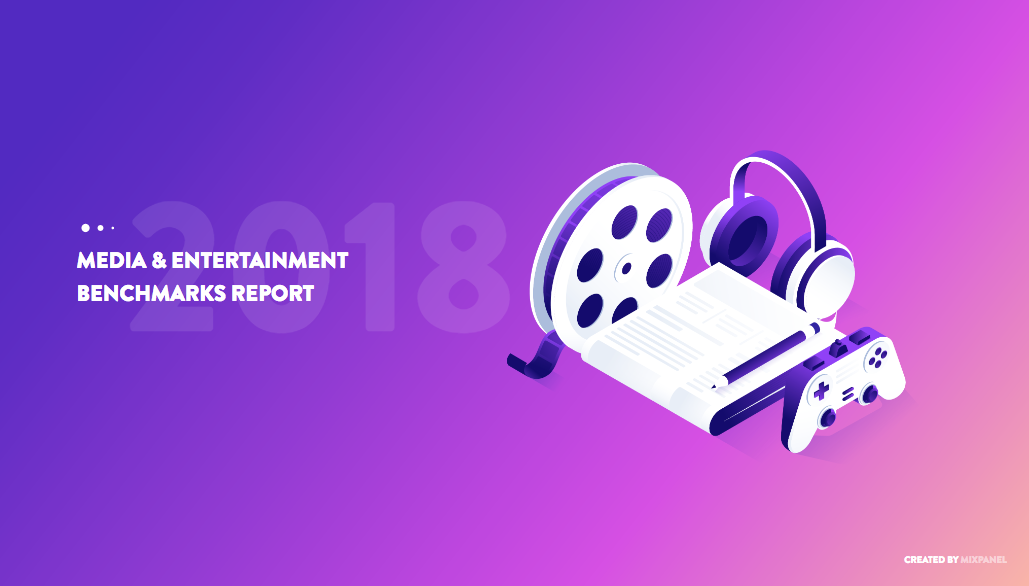 If you’re interested in media and entertainment industry, this is for you.

Even though the answer is always “it depends”, people are interested to know the answer to the question: “How do we compare to everyone else?”

To answer this question, Mixpanel (an analytics platform) analyzed aggregated data from 3.5 billion users performing 66 billion events in hundreds of media & entertainment products from around the globe.

All the charts and numbers are in the report they have compiled. You need to fill out a form to get it.
Below you will find a few of the most interesting charts and findings. For full report, follow the link at the bottom.

Audio: How long are they listening for? 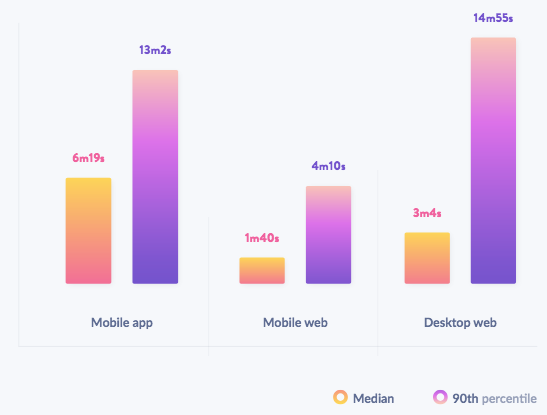 Getting users to download your mobile app can feel like beating the level of a video game, at which point you get to sit back and watch all your metrics tick upward. Despite this, desktop web 90th percentile apps are the
ones with the longest session lengths.
It makes sense: people default to using mobile apps when they’re on the move or bored and have five (or 6 minutes, 19 seconds) minutes to kill, but to use a desktop web audio product requires a certain amount of intentionality—or being trapped at your desk at work. 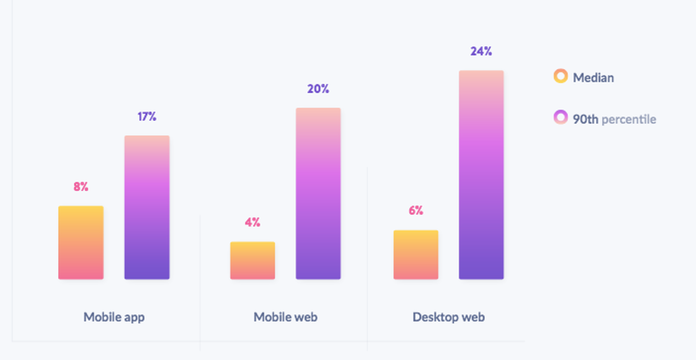 Mobile apps seem to be high floor, low ceiling, for “stickiness” (i.e. DAU/MAU); 90th percentile products get visitors to return only twice as frequently as median ones. Desktop web on the other hand, has close to a 4:1 ratio, with elite desktop gaming products getting their user base on the product fully a quarter of the month.
What this also means is that even for the best of the best (the 90th percentile) fully 83% on mobile and 76% on desktop don’t make it past the first month. Depressing, isn’t it?

Gaming: Are they willing to pay? 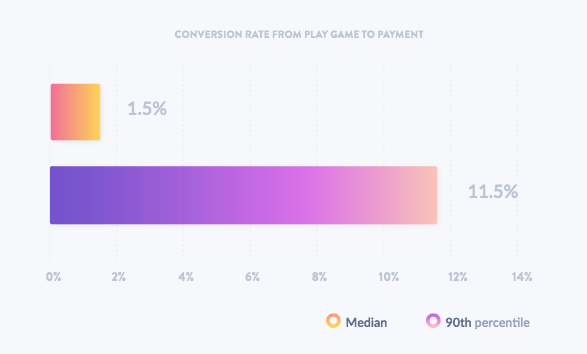 This graph shows the conversion rate from users who have actually opened and played a game to making any kind of payment. In short, it’s pretty grim! An 11.5% conversion rate is the great aspirational number, and most gaming products are converting less than 1.5% of their users.
For gaming products, getting users to take out their credit card and input it into their phone is sometimes a bridge too far; figuring out how to supplement with ad dollars can be the difference between another life and game over.

Video: How long are they watching for? 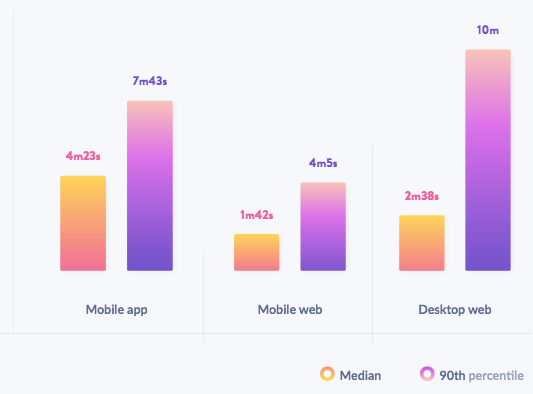 Arguably, nowhere is session length more important than for video products.
The gap between mobile app session lengths at the median and 90th percentile is smaller than on both web platforms; perhaps the energy spent trying to get mobile users to increase their session lengths is better used
elsewhere.
Conversely, on desktop web, the rewards for moving from average to elite are huge. After all, the experience of sitting back and absorbing video content is simply better on a larger screen.

Video: Will they pay for it? 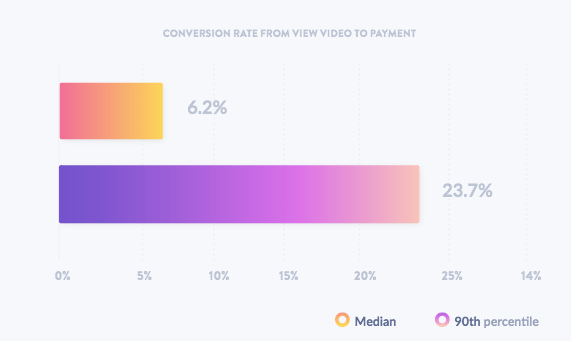 Make no mistake: people will pay for video content that they love. This conversion chart from viewing a video to making a payment shows as much. Getting conversions from more than 20% of viewers is elite.
Keep in mind that these conversion numbers contain both subscription and one-time payments. And while subscription conversions are more difficult (but also more lucrative) the greatest challenge is still going from nothing to something.

Written media: How long do they read for? 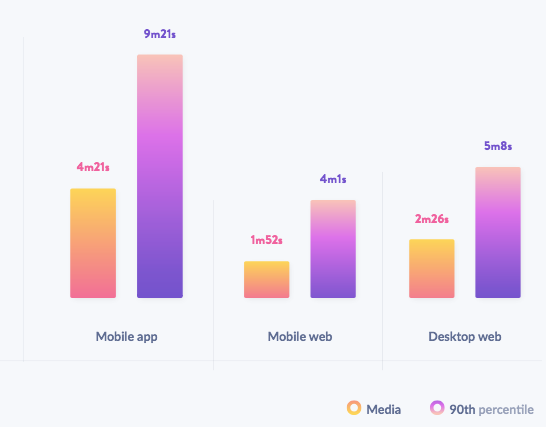 Session length, aka browsing and reading time, are vital to these products. While 9 minutes, 21 seconds, is not exactly long enough to read War And Peace (tl;dr, don’t invade Russia in winter), it’s actually a pretty long time to have someone looking at their phone!
That mobile web and desktop web behavior is pretty similar suggests that people tend to be referred into sites on those platforms in similar ways, rather than directly seeking out the product.

Written media: When are they engaging?

It shouldn’t be a huge surprise that people do more reading on their phones and computers during the work week. There are commutes and days in the office to be made tolerable, after all. The effect is particularly pronounced on desktop. Get back to work, people!
While Mixpanel’s machine learning feature and automatic insights can alert users to anomalies in user behavior, marketers and product people should learn their usage and engagement patterns so they are prepared to strike when the iron’s hot.

Written media: Will they pay? 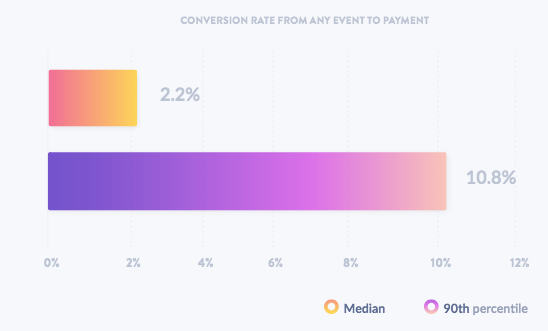 This graph shows how written media products at the median and 90th percentile are able to convert users—any users—into making a payment. Considering that written media products tend to favor a subscription model, converting almost 11% of users into customers seems like a recipe for success.
In general, it’s more reasonable to start a conversion funnel with a key action rather than a mere visit, in order to determine how effective your content is. For example, if you have a “read article” event on your site, start your
funnel there.

As always, remember about “it depends” and treat these numbers are something to strive for. It’s just tells you that some companies, under some circumstances, at some point in their business life, were able to achieve these numbers.
It’s better than nothing, right?

PS. You’re reading a written media and you do not have to pay anything. You’re welcome 🙂