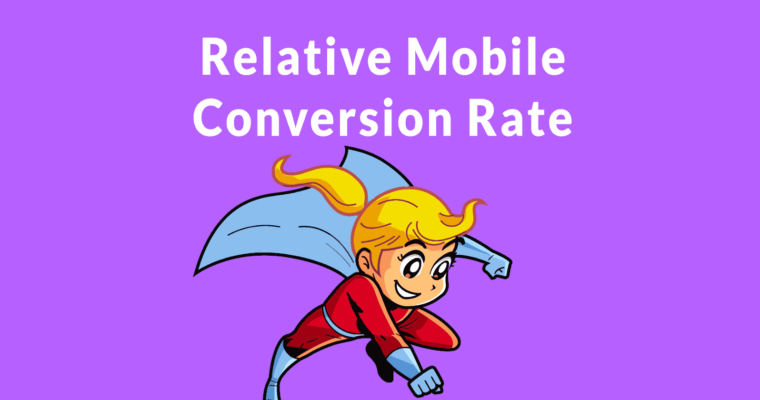 Google published an article detailing a conversion metric called the  Relative Mobile Conversion Rate. It’s a ratio of desktop versus mobile conversion rates . This metric, first discussed in 2018, has now received an official introduction. It reveals gaps in mobile performance and provides an accurate reflection of conversion rates over time. The metric is referred to as Rel mCvR.

Google’s official blog post suggests it’s an important metric to monitor because it may indicate there are latent performance improvements if the mobile version is experiencing significantly fewer conversions than the desktop version.

This is how Google’s article explained it:

“As more and more of your customers are using mobile devices, you need to ensure your mobile conversion rate is keeping up, and maintain your revenue.

…The high traffic share for mobile, with lower conversion rates, will show your stakeholders that there is a gap the company will need to bridge by improving the mobile site.”

Mobile Should Convert at Target Rate of 70% of Desktop

The author of the blog post is Lina Hansson, a conversion specialist at Google. In another article published on her own blog (Tracking – How Great is Your Mobile Site?), Lina Hansson suggested  beginning with a Relative Mobile Conversion Rate of above 50% . She then encourages marketers to  strive for a 70% relative conversion rate between mobile and desktop .

This is what her blog post on Digies.se recommended:

“I would recommend that you set a target for your Rel mCvR when you start working with site speed and conversion rate optimization. Make sure you’re above 50% now – and then start going after 70% within 2019.”

Google stated that the mobile version will consistently experience fewer conversions than the desktop because a greater percentage of mobile users are in the research phase.

The tutorial links to custom spreadsheets that can be downloaded and used to track the metric.

1. Changes that are exclusive to the desktop version of the site may skew the Relative Conversion Rate. You will have to remove that period of time to obtain a more accurate measurement.

2. Technical issues affecting the desktop version of the site can also skew the Relative Conversion Rate and make it appear that the mobile conversion rate is experiencing a higher rate of improvement.

3.  Track your data on a weekly basis  in order to obtain a better overall view. Tracking it at the daily level may be less useful because the highs and lows are more exaggerated.

4.  Physical stores may be unable to reach 100% parity between the mobile and desktop versions of the website. The reason is because mobile users tend to be in the research phase more often than desktop visitors .

The Mobile Challenge, and How to Measure It – Aug 22, 2019
https://www.blog.google/products/marketingplatform/analytics/mobile-challenge-and-how-measure-it/

PS. Finally, some sanity and a good benchmark for mobile conversions. People too often assume that mobile should convert the same as desktop. For multiple reasons, it’s not going to happen any time soon. And it’s fine, as long as you know what’s the acceptable level and what is already too low.