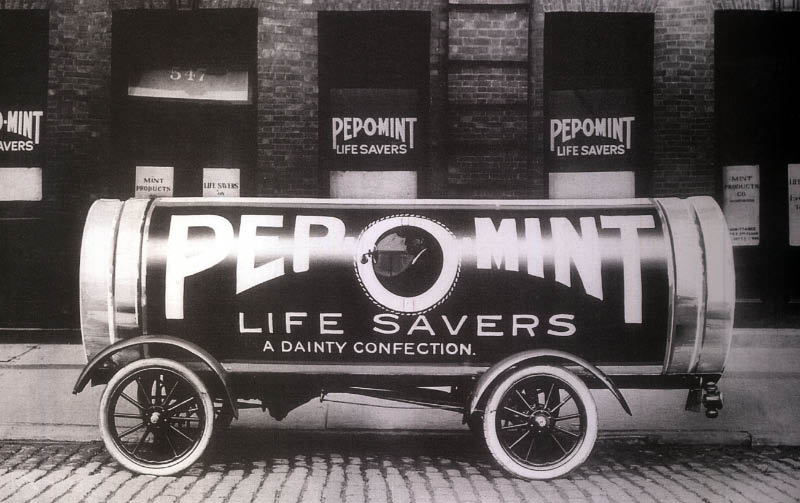 More than a hundred years ago, a remarkable entrepreneur used a clever marketing strategy to create explosive sales for a rather ordinary candy product.

Edward Noble is best remembered today for his 1943 founding of the American Broadcasting Company, which survives today as part of Disney. Decades before that, though, he was a pioneer in the candy industry. In 1913, Noble bought the rights to Pep-O-Mint candies, mints shaped like donuts and packed in a cardboard tube. Because they resembled the nautical safety device, the candies became known, and were soon trademarked, as Life Savers.

One quick change Noble made was to the packaging. He replaced the cardboard tube with a foil wrapper. This kept the mints fresher and was more convenient for customers. His real innovation, though, was in how he changed the shopping experience.

We think of a focus on friction as being a recent innovation led by digital firms trying to ramp their growth at warp speed. Jeff Bezos talked about “frictionless shopping” back in 1997. Today, founders throw out terms like “frictionless onboarding,” “frictionless banking,” and so on.

A century earlier, Noble didn’t use that term but had a similar insight.

According to a business historian Gary Hoover, Noble combined two strategies. Both focused on making his mints easy to buy. First, he  placed full racks of them next to the cash registers at cigar stores and restaurants  across the U.S.

Noble’s second tactic was even more insightful. He  priced the mints at five cents a roll, and encouraged cashiers to always include a nickel when they were giving change  back to a customer.

The ease of grabbing a roll and handing a single coin back to the cashier created explosive sales growth. According to Hoover, sales rose from 900,000 rolls in 1914 to 68 million rolls by 1920. That’s over a billion mints per year and a compounded annual growth rate of more than 100% for six years! 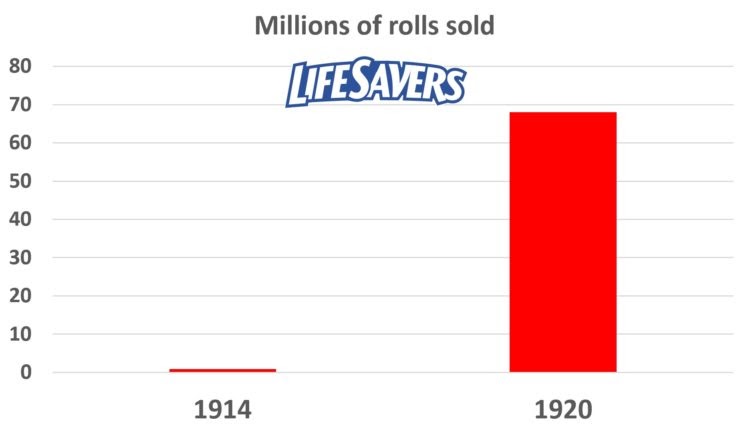 As mints, early Life Savers were unremarkable except for a memorable brand based on their proprietary hole in the center. Other mints no doubt tasted about the same. The key to the explosive growth of Life Savers was convenience: customers could make the purchase without thinking.

Noble was smart enough to place the displays not in candy stores but in the exact places where people might want a mint – when paying at a tobacco store, saloon, or restaurant. And, the “nickel change” practice ensured near-zero thought and effort to make the sale. To put it in the terms proposed by behavioral economist Daniel Kahneman, the purchase decision could be made intuitively by System 1 without needing to involve the more effortful System 2.

It seems likely to me that for many customers, this could become a habit. Buy a few cigars or a pack of cigarettes (definitely a habitual purchase), and, without thinking, pick up a pack of Life Savers for after smoking.

If your product or service isn’t all that different than what your competitors offer, try a friction-reduction strategy to build your advantage. If customers find it easier to buy from you, you will outsell your competitors. This approach worked a century ago for Edward Noble, and it’s working today for Amazon, Uber, and many other firms that focus on frictionless customer experience.

How One Simple Strategy Changed the Candy Industry

PS. This is also why Stripe grew so quickly. They took away about 90% of friction out of the payment acceptance process.