The team dedicated to the Analytics product at Salesforce has conducted research to determine if color influences how quickly and accurately users make decisions.

They also studied how people respond to colors via their first impressions and longer-term preferences and value judgments.

The findings surprised them.

THE PARADOX OF LIGHT AND DARK COLOR SCHEMES

In one study, Salesforce examined how different foreground/background colors (“themes”) influence performance and preference. Before conducting their research, they guessed that the dark color theme would be more prominent and appealing to users.

They ran surveys with questions regarding first impression, preference, and value.

To determine value, participants ranked charts by which would be worth the least or most if they had to pay for each type.

To judge performance, they measured response time and accuracy for decisions made with charts rendered in different themes and palettes.

After conducting research, Salesforce discovered that participants generally preferred the lighter (and sometimes the hybrid) themes over the dark theme. Participants also had better first impressions of these themes, and saw them as having higher value – meaning they would be willing to pay more to use that type of chart.

Surprisingly though, the performance data from these same users revealed a different story, as users made decisions faster, and just as accurately, with charts displayed in the dark theme.

As a result of this feedback, the products now use light themes by default. They employ a hybrid theme in their analytics apps to help emphasize important information on the central “hero” chart(s) in the dashboard. 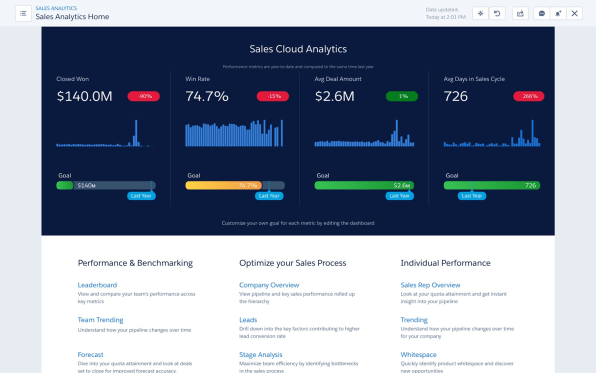 The analytics app with a hybrid theme to show primary charts and metrics.

THE CASE AGAINST GRADUAL GRADIENTS

In another study, Salesforce examined how people responded to different color combinations (“palettes”) used in charts.

They anticipated that people would have stronger preferences and value associations (ranking what charts they would pay most for) for palettes that represented shades of a common set of colors (e.g., a gradual gradient of blues and greens). This assumption was due to a sense that palettes with many different colors could be seen as less aesthetically appealing.

Participants in that study saw many charts rendered in six different color palettes, each designed to emphasize different aesthetic goals. Similar to the previous study, participants provided impression, preference, and value feedback, and their decision-making performance (speed and accuracy) was also captured. 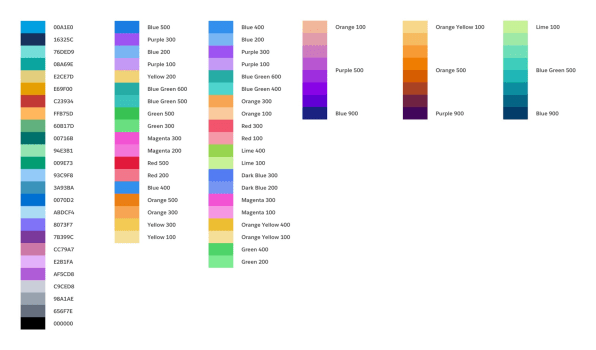 To their surprise, they repeatedly found performance and preference benefits for the non-gradual gradient charts, compared to the palettes they expected to be more appealing.

In the open feedback provided by users, a number of people acknowledged this phenomenon, sharing that they expected to like the more gradual gradient palettes, but ultimately found them difficult to use in some analytics contexts.

The general consensus was that, while appealing, the subtle color variations made it more difficult to distinguish insights; the colors that were least appealing in terms of palette choice were easiest to read due to distinct color gradations.

As a result of this research, the default color palette for operational reports and dashboards, as well as charts in the Einstein Analytics platform, is one that includes mid-tone hues from around the color wheel.

Studies such as these help us validate our assumptions and inform our product teams in their decisions about aspects of the “default” user experience.

It’s important to give the users the default option of what they feel is better, not necessarily what is objectively more effective. At the same time, you should also, of course, have the option to customize it.

For all of us, it’s a humble reminder that we don’t always know what users will actually prefer. Even the users themselves often don’t.

Despite what we think is best for design and performance, data should be used as a guide to make informed decisions.

PS. Back in the day, when I used to be a programmer, I even had a long, over 2,000-word blog post, comparing light and dark themes of different IDEs (Integrated Development Environments). 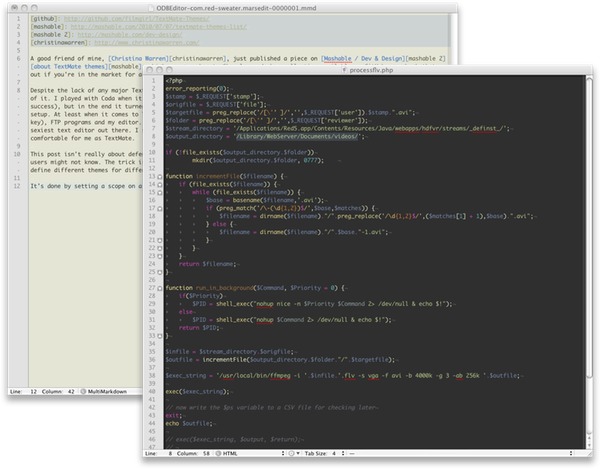 I preferred dark back then, and I use dark to this day.