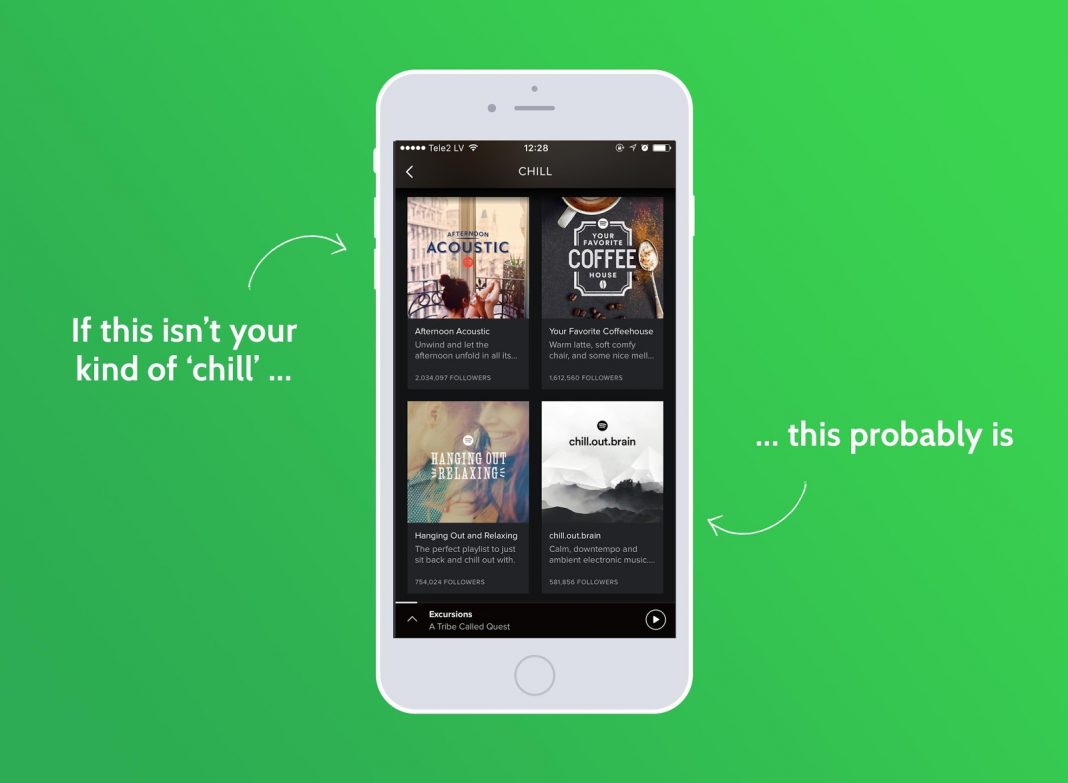 In 2015, The Fader reported that out of Spotify’s 75 million monthly users, 20 million are paying customers.

A 26.6% conversion rate is staggering on freemium products.

If 26.6% was staggering then how should we call 46%? Eye-popping? Astounding? Stupefying?

“A really good conversion rate for free-to-paid is 4%, like Dropbox. Awesome for them, but normal rates are more like 1%, and that’s if users are reasonably active.”

If 1% is average, and Dropbox‘s “really good conversion rate” is 4%, then 46% (or even 27% from a few years back) is absolutely bloody ridiculous. 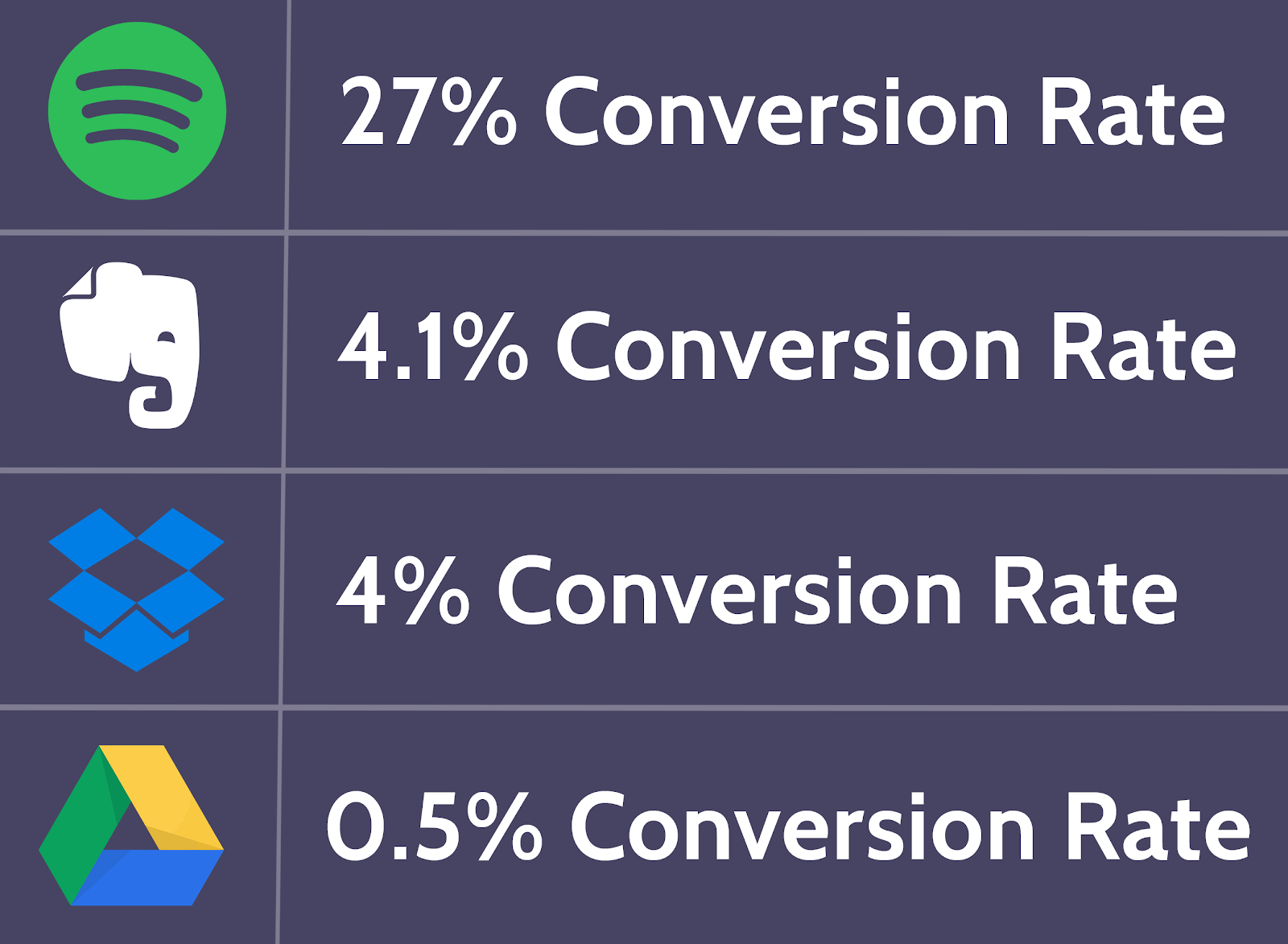 As for its retention, 80% of all users (free and paid) use Spotify multiple times per week.

Today’s article looks inside the forces at work here, from a product, UX and marketing perspective, examining the conversion triggers and the ways it ensures crazy-high conversion and retention.

Spotify’s highlighted method of account creation is by linking credentials from Facebook. For those who are already signed into Facebook on their phone, this reduces friction by pulling in your data and means you don’t have to fumble for your email address and password. 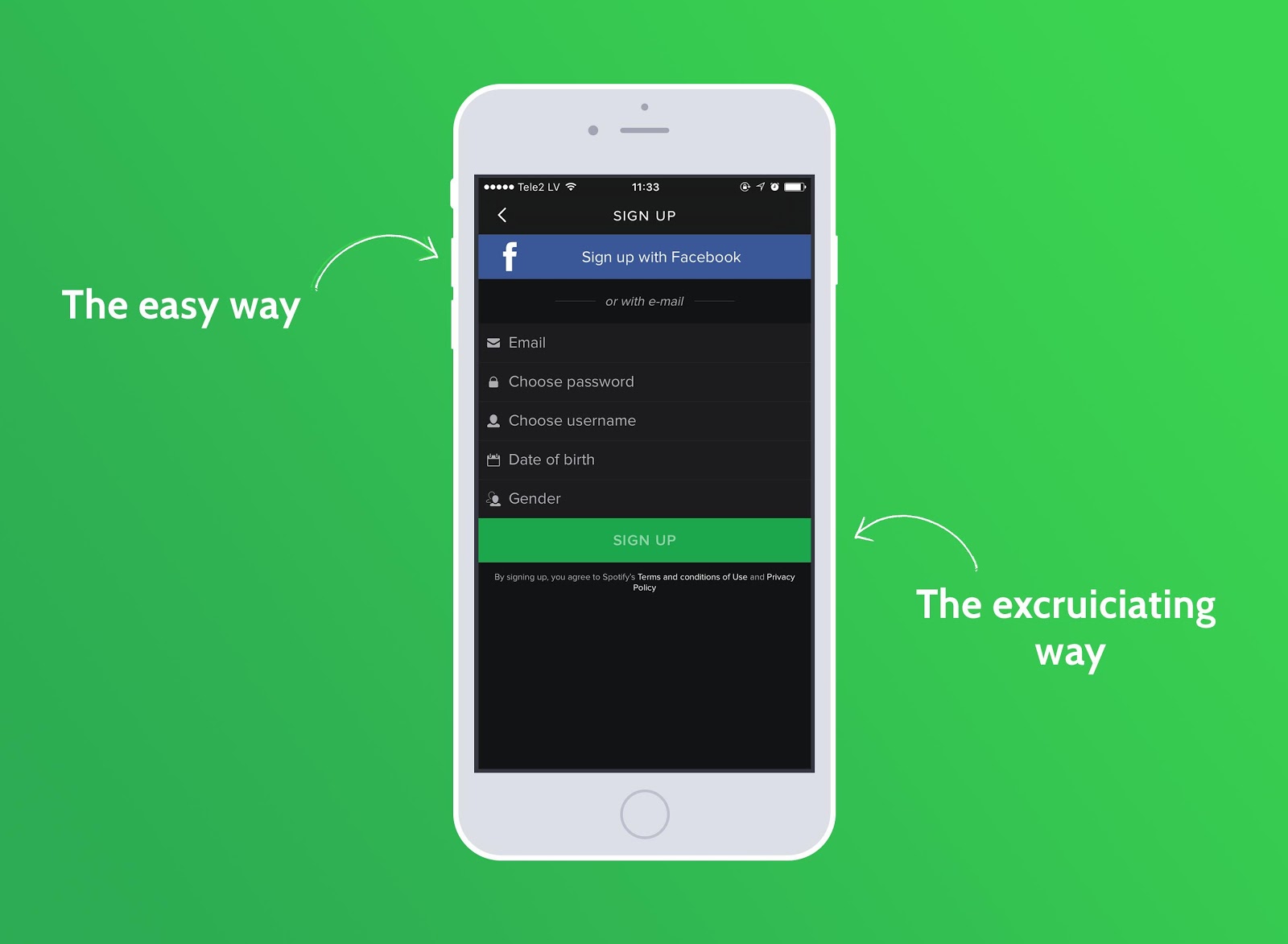 One tap, allow the integration, and you’re inside.

As well as a way in, the integration with Facebook does two other things:

80% of your mobile users have Facebook accounts, and apps see a 20% increase in conversion when signing up is as simple as pressing that blue button.

It’s likely that the Facebook integration played a huge part in the virality of Spotify, as reportedly every paying user brings 3 free users on board.

The whole point of Spotify is to get you to discover music, and the way that it initially encourages you to do this is through curated playlists.

By choosing a playlist with a few songs you already know, or a theme that matches your taste, Spotify cycles through and mixes songs you know with songs you don’t.

The natural reaction to a song you like but don’t know is to explore the artist, album and other playlists which feature it — something Spotify makes extremely easy and a focal point of the first screen you see. 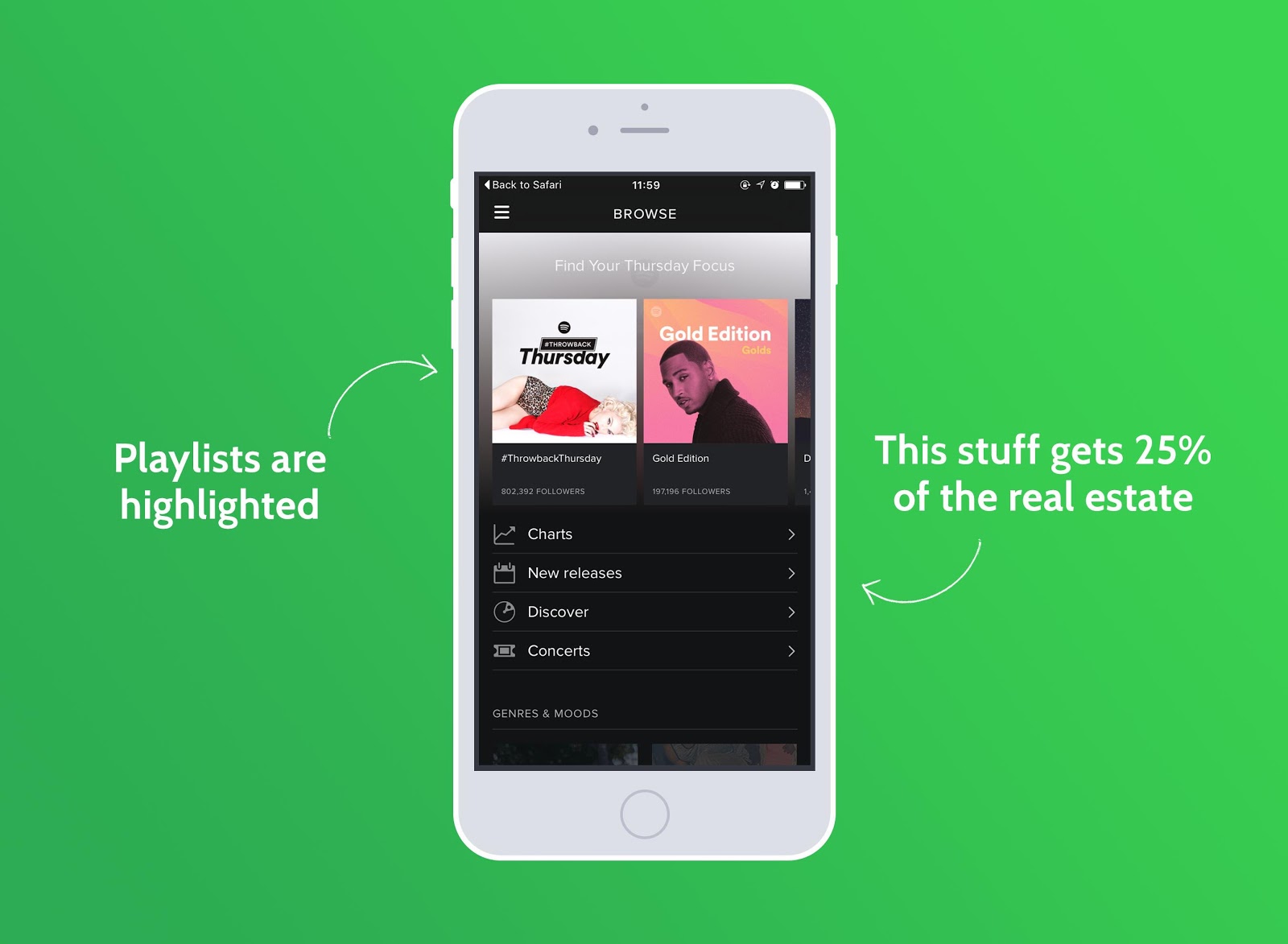 But here’s the catch. With a free account, you aren’t in full control of what you listen to at any time. Even if you make your own playlists, they’re only available on shuffle.

So, one of the main reasons Spotify gets you is because it naturally develops a new, refined taste thanks to its spookily on-point recommendations algorithms. And when those tastes are developed, shuffle play doesn’t cut it any more. You suddenly don’t want to listen to every track from the Brain Food playlist any more. You want to pick and choose, re-order the tracks and have full control over the curation process. You can only shuffle and skip so many times before you’re stuck with whatever Spotify destined for you.

People will try and game the system to hear the exact song they want, but Spotify makes that near impossible. You get 8 skips in a shuffled playlist or album before you’re hit with the call-to-action: 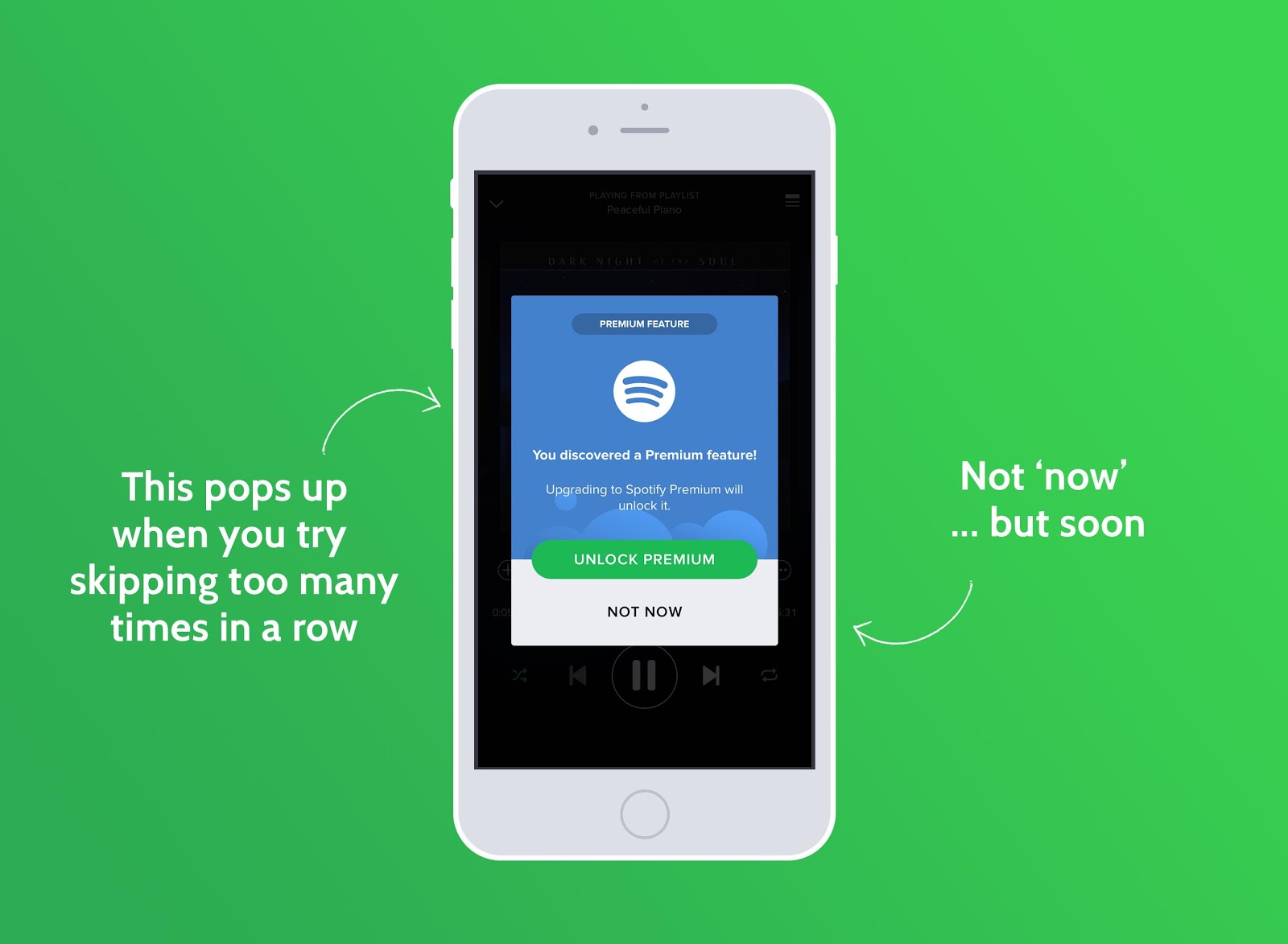 Stage 3: Spotify empathizes with you

Below the suggested playlists on the first-use screen is a list of moods, situations and genres. A core reason people listen to music is to intensify their mood.

Spotify taps in to the ‘music as a soundtrack to my life / how I’m feeling right now’ vibe by giving descriptive categories with hyper-focused playlists inside.

For example, inside the Chill mood, you’ve got a range of chilled out music, each appealing again to places, ‘sub-moods’ and tastes. 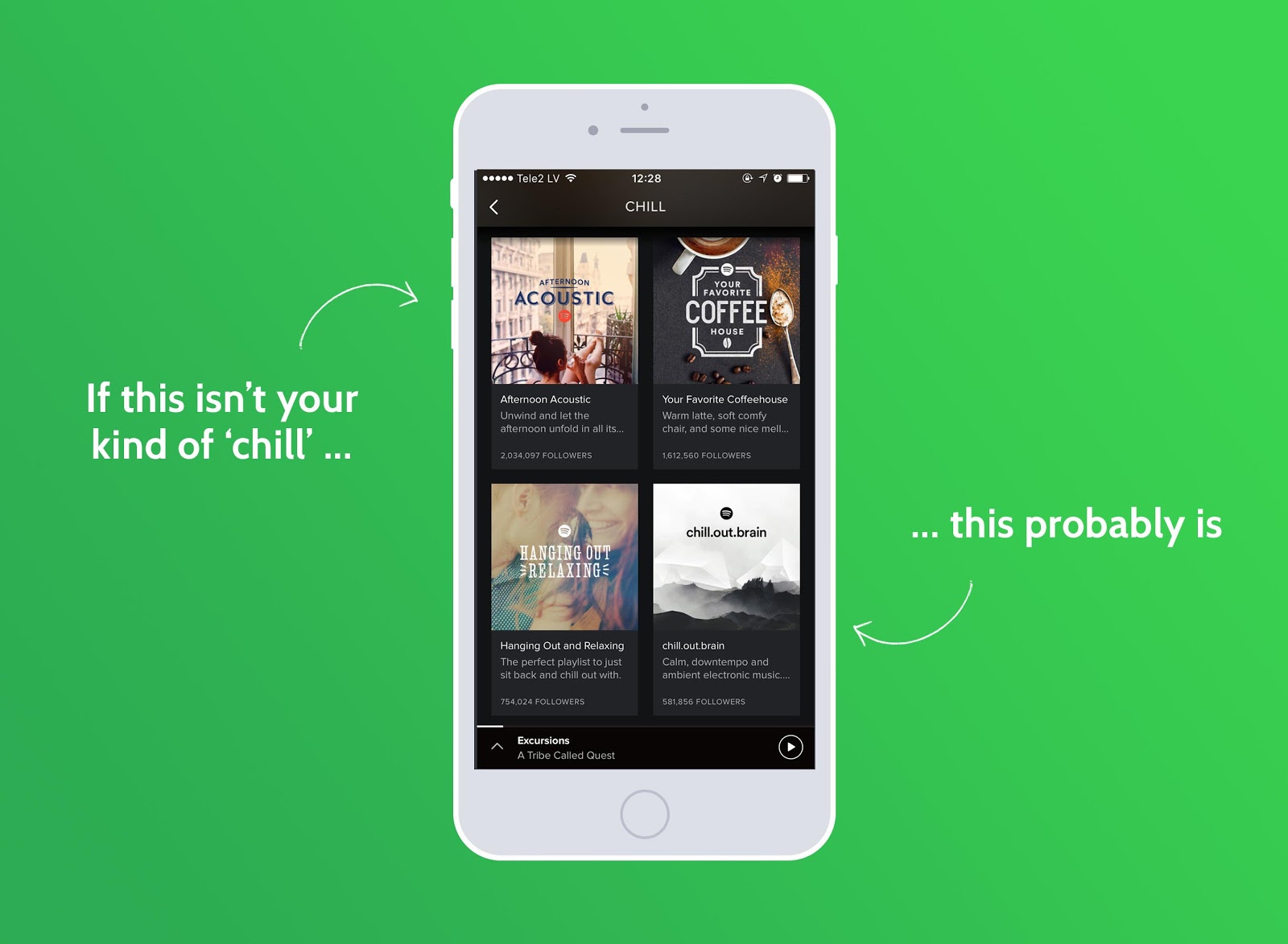 The playlist cover art, typography and copywriting all appeal to users who identify with different aesthetics. It’s easy to ignore the uninteresting stuff and instantly identify with the music that speaks to you.

By encouraging you to get acquainted with playlist and linking it to a tangible, existing habit in your life, Spotify entrenches itself as a soundtrack machine able to generate fitting music for any situation. Building a product into the habits and routines of your users is a powerful way to increase retention, but Spotify does it in such a personal way by understanding the modes and means of music consumption — at a party, while running, focusing on your studies, etc. Once you’ve used the playlist once for this purpose, you’ll start to miss it when it’s gone.

Stage 4: You make an ‘investment’ in the app by customizing it to suit your tastes

Getting users to tailor the app to their own tastes is a time-tested retention tactic because the user has already made an ‘investment’ in the app. If they don’t convert, then it’s their loss of time and effort put into creating a personal experience.

Spotify does this by letting users save music to their account, build custom collections, teach it about their tastes and connect with friends on Facebook and through Spotify’s own social network.

This isn’t a monetary investment to tie you down (long contract lock-ins aren’t tolerated any more), it’s more important and personal because it’s an investment of time.

Connecting Spotify to Facebook is another investment. Creating dependencies between the apps means there’s a level of accountability. Your friends ‘like’ your playlists, and what you listen to. You’re a taste-maker in your circles, and you wouldn’t throw it all away or limit it by not converting.

Spotify doesn’t ask you to select a list of genres you like and give you a list of suggestions. It lets you discover artists of your own accord, because when you find something by yourself you feel more connected to it. Sharing that with others makes you feel like a pioneer. 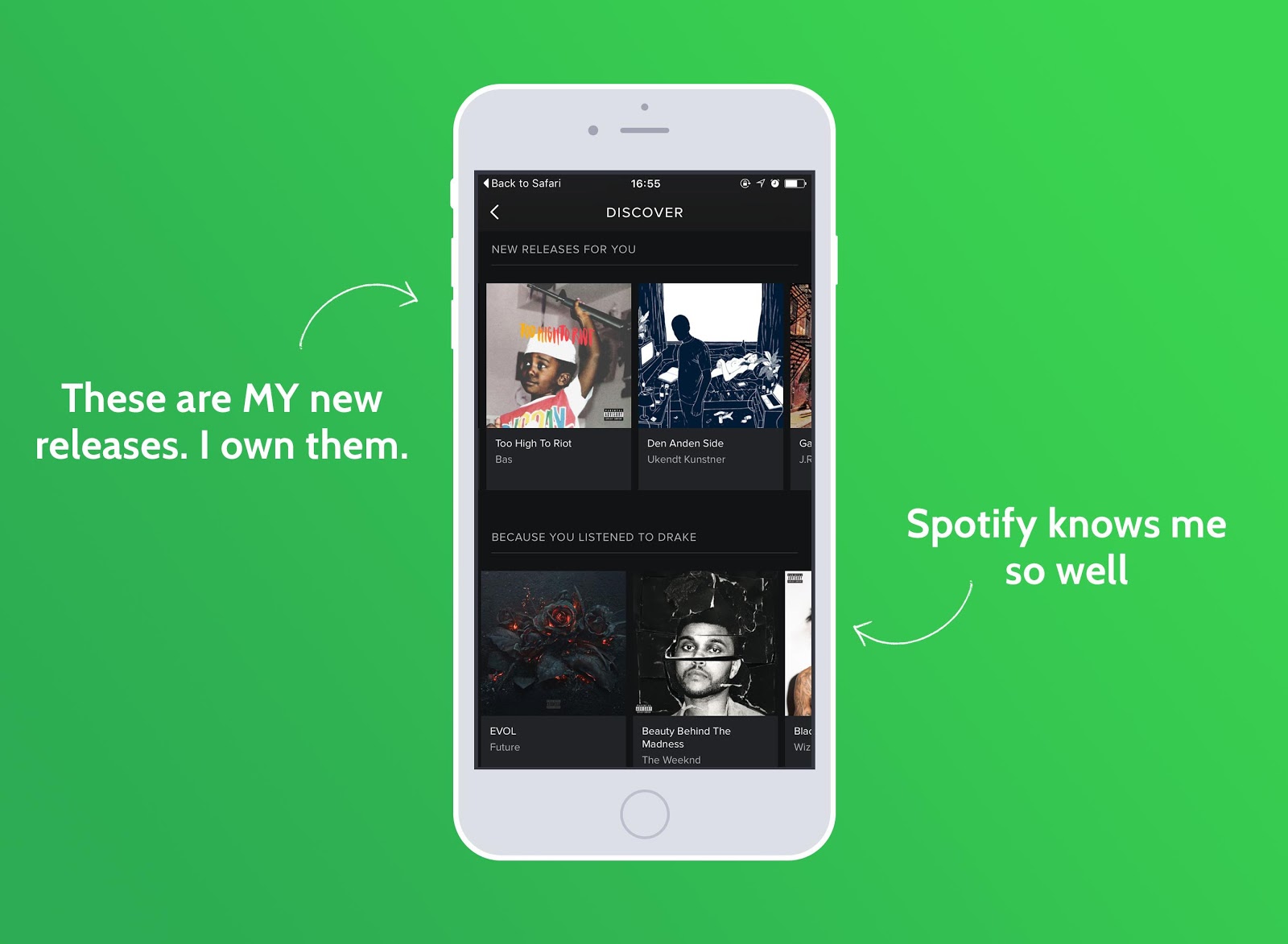 By leaving you up to your own devices, but generating custom playlists, it doesn’t ask for your investment. It doesn’t need it. Its suggestion algorithms are strong enough to figure you out, and, more often than not, they’re right on the mark. That gets you invested in the way you’ve taught your personal instance of Spotify all about yourself. Your Spotify understands your taste even better than you do.

The calls-to-action aren’t too intrusive, but they subtly ruin the immersion

Another reason why Spotify’s conversion tactics manage to disguise themselves as being non-aggressive (while being aggressive as hell) is that you don’t realize how much the bad parts grate on you. 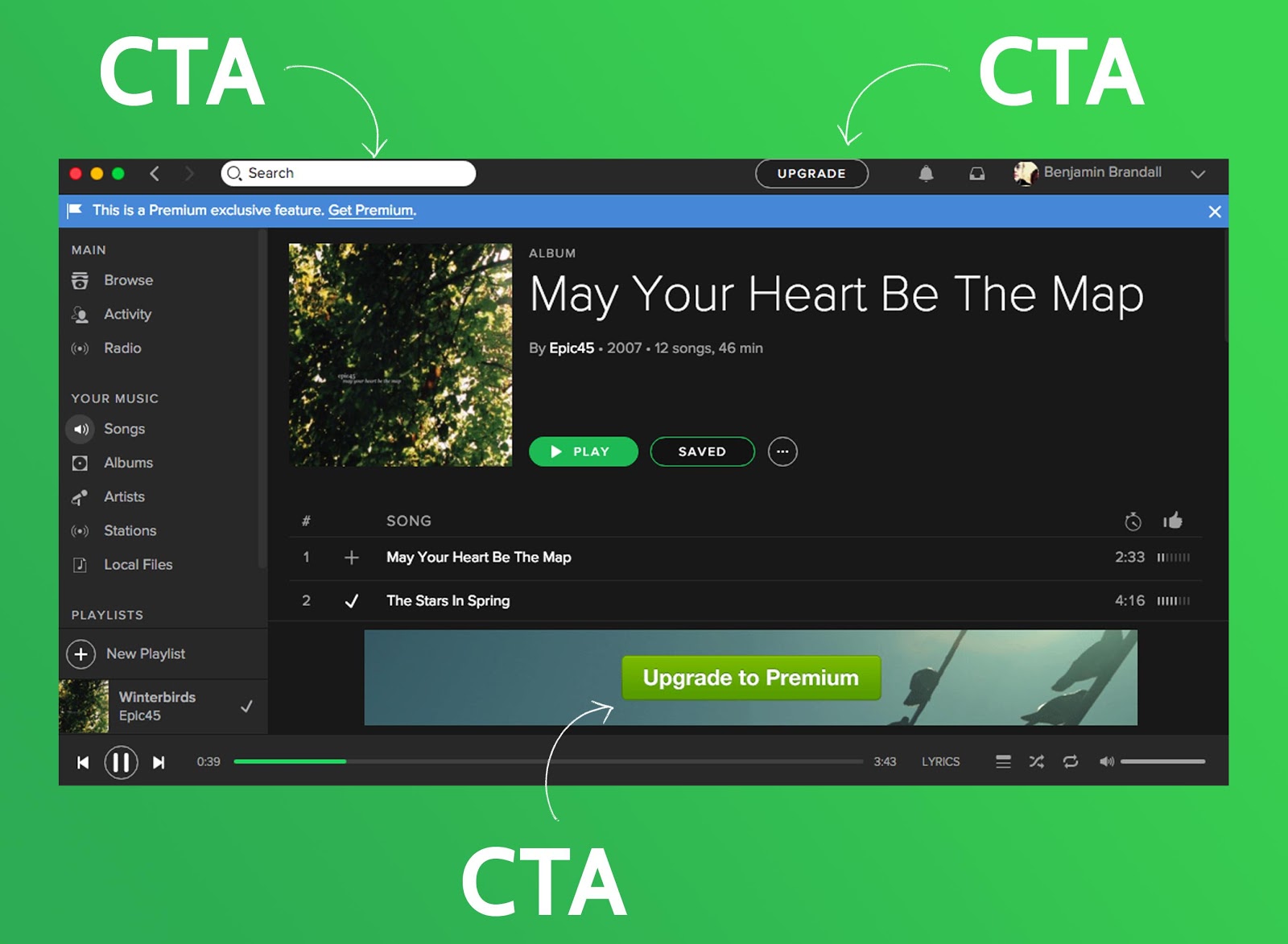 A key function of music is immersion. Some of the most popular playlists on Spotify are for helping users do focus work, like studying, writing, or something that involves intense concentration.

You’re 15 minutes into a chill Brian Eno soundscape when suddenly a glaringly out-of-place pop track starts up, followed by a guy telling you something you don’t care about right now. Thirty seconds later and it’s over, and you’re back into immersion mode.

In the same way that Spotify lets you skip through a shuffled playlist 8 times before nailing you with a CTA, the adverts are subtle and infrequent enough to ignore — but still, no doubt, have a profound effect on conversion.

There’s nothing like the feeling of something you own being taken away from you to whip you up into a frenzy.

By letting users save music for offline use but then slapping them with stream-only mode afterwards, those 30 days of freedom will seem amazing in comparison to your now limited state of existence.

It gives users a taste of what they could have if they converted in such a profound way because a month is a long time to build a collection. Spotify makes it very easy to build because of its Discover feature that recommends 20 albums per day and skilfully evolves based on your current tastes and habits.

As soon as you get the listen offline privileges, you’re likely to start hoarding as much music as possible to make the most out of your trial. In their words, it’s Your Music. That only gets you in deeper.

The user journey will always lead to Premium

Spotify has several moments in the user journey which either outright ask for the conversion or hint that the feature is only available in premium. The ask moments — or hard pushes — are seemingly available features which reveal themselves to be premium-only. 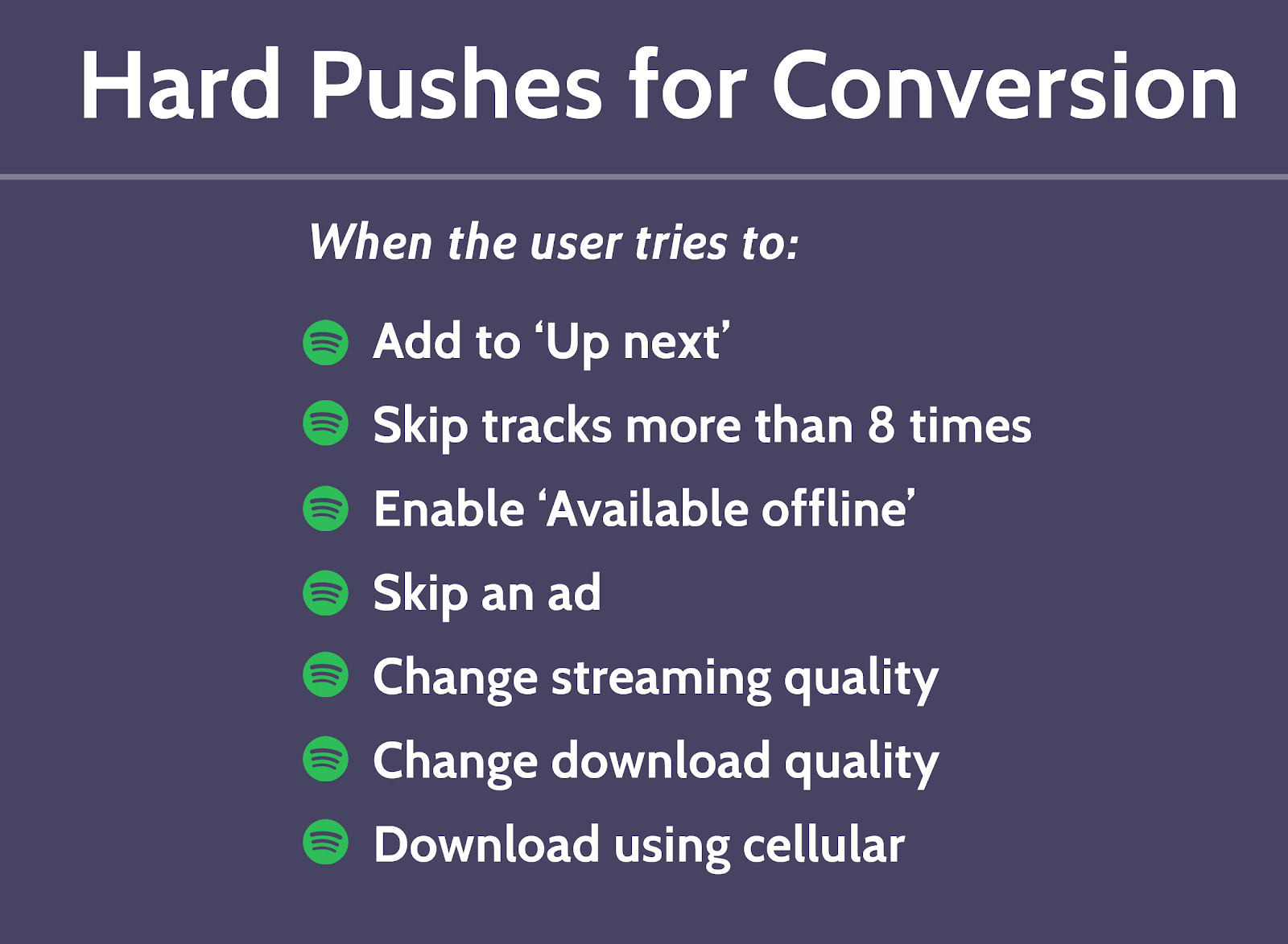 The moments when Spotify hints that the experience could be better if you were to be on premium occur when:

So, even though Spotify does have a large number of free users, it’s easy to tell why its conversion rate is so high.

As soon as you get serious about music, discover new things to be fanatic about, store music and make the app your own – at that moment, it’s time to convert (or else).

While it may be unfair to compare Spotify to Dropbox (different kind of products), it pays to study both and see which techniques and hooks they use to make this hardest conversion – from free to paid.

PS. Spotify is doing an increasingly better job at converting their users from free to paid. It pays to regularly check their app to see what they’re trying out and what sticks. What you see has been tested and proven to work. It’s a great source of world-class inspiration.